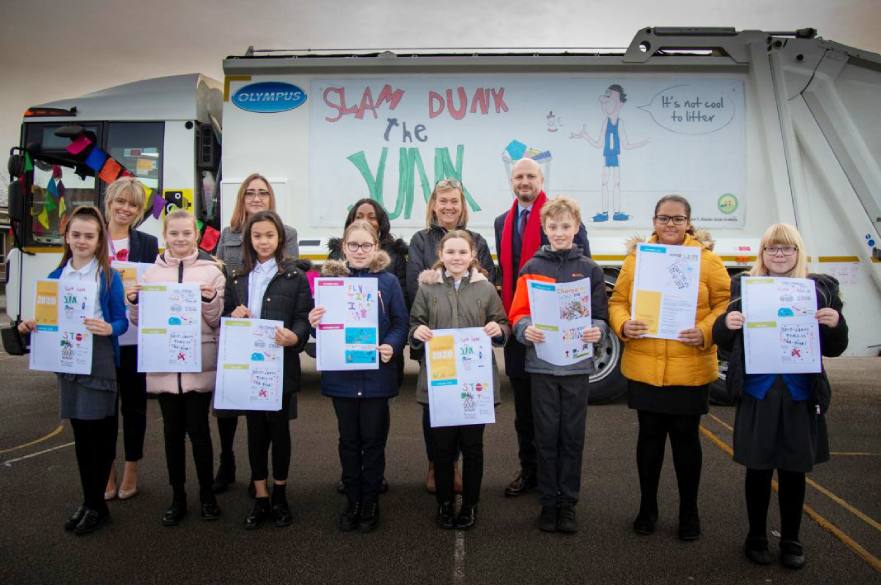 Children from schools across Derby took part in a competition to design a campaign to raise awareness of fly tipping and litter in the city. The winning design was displayed on a brand new refuse truck that was unveiled at Alvaston Junior School on Monday (16 December).

Derby City Council and Derby Homes ran the competition at four schools across the city:  Redwood Primary, Alvaston Juniors, Village Primary and St James Juniors. Pupils were asked to come up with designs to highlight the issue of fly tipping and littering and develop a positive message that could be shared across our neighbourhoods.

Three winners from each school were selected and had their designs displayed in the areas surrounding each of their schools. Riley from Alvaston Junior School produced the overall winning design and as well as being displayed around the school, her winning poster was installed on the side of a refuse truck that will now be seen across the city.

Each winner also received a £20 gift voucher, with certificates awarded to all year five students who took part. The 12 top designs from each school were also collated to create a calendar for each school.

The project was put together by Derby City Council’s Neighbourhood Teams as part of the council’s commitment to reduce fly tipping and littering in our neighbourhoods. Derby Homes funded the prizes, poster boards and the large banner on the refuse truck as part of its commitment to the Local Customer Priorities set by residents in the same areas.

As well as engaging the pupils in the competition, the aim was to educate on the importance of looking after the areas in which they live, being conscious of the need to not drop litter and how fly tipping can affect the community and the environment. The poster designs encourage others to be more responsible for keeping their own neighbourhoods tidy.

The designs these young people have come up with are really eye catching. They should All be really proud of themselves. It’s a fantastic idea to engage our young people in this way and it’s an important message to share and I hope it will encourage people of all ages to think twice about the impact of littering and fly tipping.