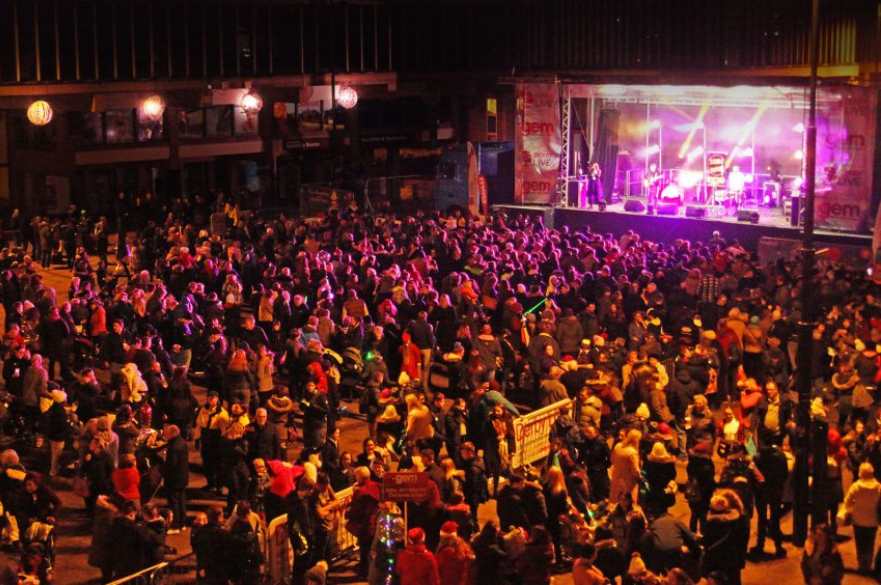 The countdown is on to this year’s 2019 Christmas Lights Switch-On presented by Derby LIVE, Derby City Council’s entertainment arm, and hosted by Smooth Radio East Midlands, who are the official radio station for the event. The traditional Christmas celebration will be held on The Market Place on Saturday 16 November, with a stage show from 3:30pm and a festive parade from The Spot to The Market Place from 4:30pm.

Derby LIVE is delighted to announce that X-Factor’s United Vibe will be headlining the 2019 Derby Christmas Lights Switch On. This year’s event will also feature additional performances, with local acts showcasing their talents for an afternoon that will be sure to put everyone in the festive spirit.

United Vibe will be taking to the stage between 5:30pm and 6pm and with the big switch on at 6.00pm.

United Vibe starred in 2018’s X Factor making it all the way to the live shows. The 5-piece band which features members Elliot Horne, Jon Guelas, Kieran Harrison, Jack Tisdall and Blaise Duncan were formed by X Factor judges. Having since released singles Esta Noche and Ain’t it Funny the band have just concluded their second UK and Ireland tour for 2019. Since leaving X Factor they performed with Robbie Williams at the BST Hyde Park in front of crowds of 65k people and doing their own set on a separate stage. This won’t be their first performance in Derby, having performed at the Derby Pride celebrations earlier in the year.

Smooth Radio East Midlands presenter Gareth Evans will be hosting this year’s Christmas Lights Switch-On event, which will see a number of local acts on stage. Included in the line-up is Jamie Joseph, an RnB soul singer and songwriter from Derby. The Newcanes, a Derby-based contemporary folk-rock group, who in 2019, played festivals throughout the UK including Bearded Theory, Wickham Festival and Boomtown. The Invisible Friends Choir a UK Registered Charity which supports children & young people with Invisible Disabilities using the power of music to help society to ‘look beyond what the eye can see’ will take the stage to get everyone in the Christmas spirit.

The event will be British Sign Language Interpreted by Sarah Gatford.

This year’s parade will include a fantastic array of performers. Families are invited to join the parade at The Spot where the parade entertainment will be kicked off around 3:30pm with advance performances by local dance companies.

Hot House Music provides outstanding musical opportunities for young musicians throughout the Midlands, their group The Saxophonix will lead the parade which arrives at the Market Place at 5.00pm. For an extra festive treat Derby LIVE’s Peter Pan star Auntie Hilda who is played by Derby’s own Morgan Brind and Grant Thomas who will play Peter Pan will join the parade and then appear on stage once it reaches its destination.

From 4.00pm there will be a celebration of Derby’s upcoming urban artists, MCs and singers from local music and arts development organisation Baby People at St Peters Cross which will join the parade as it passes.

The parade will depart from The Spot at 4:30pm passing St Peter’s Cross to arrive at The Market Place around 5.00pm.

Santa will be travelling in the parade bringing festive cheer along with him. There will also be walkabout acts Clock and Crown Walkabout Performers entertaining the crowds.