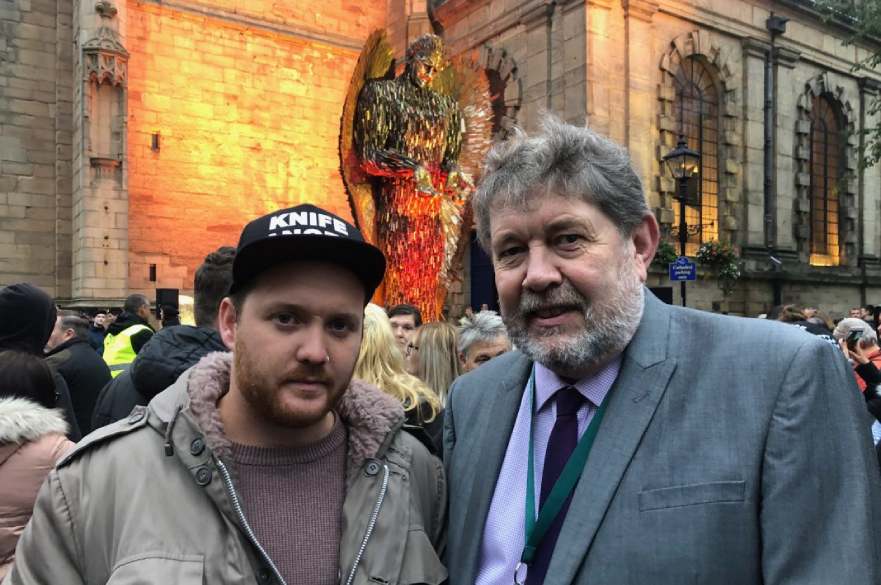 The National Monument Against Violence and Aggression has arrived in Derby.

Known as the ‘Knife Angel’, the spectacular 27ft sculpture, made from up to 100,000 bladed weapons collected in knife banks during police amnesties across the country, will be next to the Cathedral on Irongate, until Wednesday 30th October.

Created in collaboration with all 43 police forces, the Home Office, Anti-violence groups and hundreds of families who have been affected by knife crime, the monument is a symbol of the nation’s intolerance to violence and aggression.

It was created by the British Ironwork Centre, by sculptor Alfie Bradley (pictured with Cllr Poulter at the opening event) to highlight the impact knife crime has on people, families and communities.

Relatives of those killed by knife crime were invited to engrave the blades with names and messages for their loved ones as part of the sculpture.

One such relative is local woman, Rachel Webb. Rachel’s son, Tom, was 22-years-old when he was stabbed and killed in St Peter’s Street, Derby by a 16-year-old boy in January 2016. Later that year Rachel supported an amnesty held across Derbyshire and knives from this amnesty were donated towards the creation of the sculpture.

Before the arrival, Rachel said:

I am thrilled to learn that the Knife Angel is coming to Derby. It’s an emotive thought-provoking monument, which is helping to educate and raise awareness of the increasing knife crime epidemic on Britain’s streets. As a mother who has personally been devastated by the murder of my beautiful son Tom, I am deeply grateful to the many organisations and individuals involved in bringing the Knife Angel to our community. It’s my hope that the Angel will encourage open conversations in homes, differing community groups and schools, helping our young people to understand the horrific consequences of carrying and using a knife. I, like so many other murder victims’ families living daily with such unmeasurable pain, have inscribed my son’s name on a blade on the Angel. Tom’s name is surrounded my many names, lives also taken due to unnecessary acts of violence. I feel that the Knife Angel stands tall in honour of all our dearly loved and missed, it is also a beacon of hope lighting the way forward for much needed urgent change.

The Knife Angel has being brought to Derby by a group of agencies and organisations across the city, including: Derby City Council , Derby Cathedral, Derbyshire Police, Police and Crime Commissioner Hardyal Dhindsa and University Hospitals of Derby and Burton NHS Foundation Trust.

The sculpture is a powerful visual symbol and we hope that all who see it, especially young people, will reflect on pain and suffering caused by knife crime and think about how they can make a difference. We have worked very hard with our partner agencies to bring this important piece to the Cathedral and I’d like to thank them all for their hard work. I encourage everyone to take time to come and see it.

We seem to have been working on this project for a long time and we are now all very excited that the Knife Angel is here. The sculpture is designed to be a symbol for the pain, feelings and loss that family and friends of victims of violent crime can experience and to shine a light on the futility of such actions. It is a spectacular sight and we hope as many people as possible come and visit and learn how we can all work together to reduce knife and violent crime. I want to thank everyone involved in bringing the Knife Angel to Derby, particularly the hundreds of volunteers who have come forward to act as marshals and the local companies who have given up their time and expertise.

The organising group are grateful to a small group of local business who have offered their help and expertise, including:  Bowmer and Kirkland, Mercia Image Ltd, Greendog, Work Wallet, QSC Signs and Graphics, Total Hire and Sales, G Wathall and Son Ltd and Silver X Logistics.

If you have any information or are worried about violent crime in your community you can speak to your local Safer Neighbourhood team by using any of the following non-emergency contact methods:

You can also anonymously contact the independent charity Crimestoppers, on 0800 555 111 or by visiting www.crimestoppers-uk.org