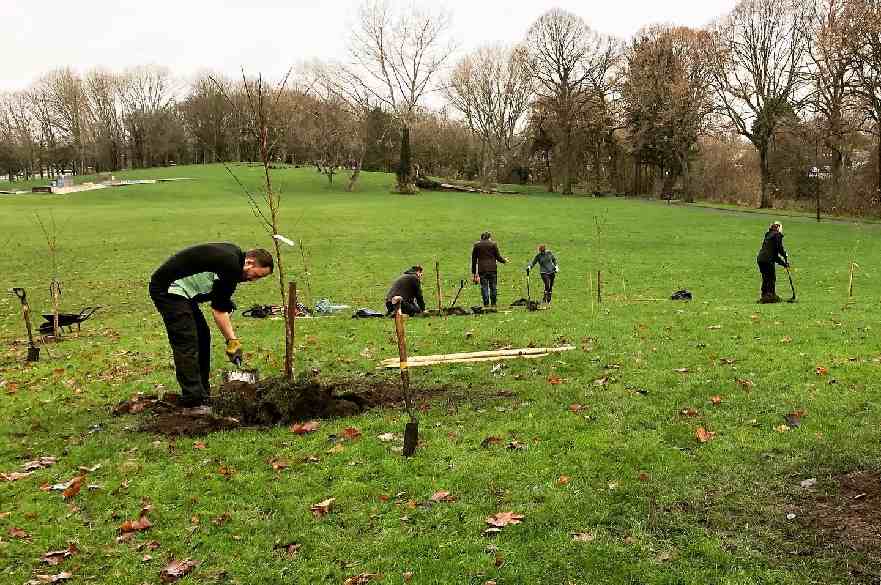 The 32 trees were planted by the Derby Parks team

A total of 32 cherry tree saplings have been planted at Bass’ Recreation Ground in Derby to mark the partnership between the city, Derbyshire and Toyota city.

At just 1.5 m high, it will take a while for the sakura cherry saplings to fully mature, but in as little as four months’ time the first signs of spring blossom will appear. Once the trees become established, visitors to the park can look forward to enjoying the Japanese tradition of ‘Hanami’ – enjoying the glorious seasonal display of beautiful flowers and picnicking under the cherry blossom.

The trees were planted by the Derby Parks team. A formal dedication ceremony is planned for spring. Hundreds of sakura cherry trees have been gifted to the UK through a bidding process from the Japanese Society. Derby City Council, Derbyshire County Council and South Derbyshire District Council have close links with Japan, having been twinned with Toyota City since 1998, following Toyota Motor Manufacturing UK coming to Burnaston.

Since then the relationship between Toyota City and Derby has created opportunities to work in partnership on projects including education, sport, tourism and environmental sustainability while also supporting the company, which employs over 2,500 people in Derby.

The sight of cherry blossom in the spring is spectacular, so this is a lasting and lovely way to celebrate our links with Japan, and particularly Toyota City.

The Toyota City Partnership Board (TCPB) was set up in 2018 – the 20th anniversary - to develop opportunities across education, culture, economy, environment and sport, with the three councils joined by a wider set of partners from education, economic facilitators, tourism facilitators and the National Forest.

The tree planting is part of a wider project, with a total of 100 trees being planted at Bass’ Recreation Ground, Shipley Park, and Swadlincote. A further 63 trees are going individually to schools and colleges, mainly in Derbyshire.