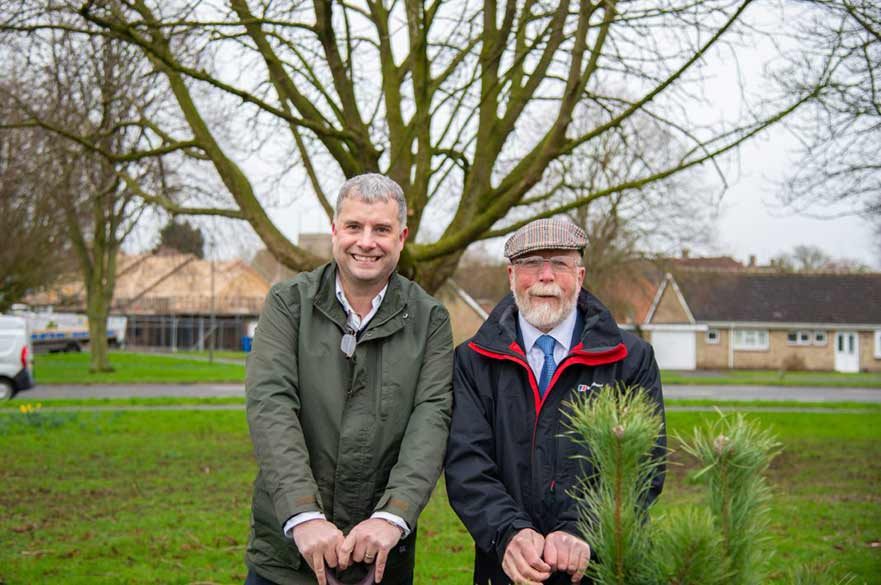 Derby Homes have planted the first of 100 trees to celebrate 100 years of council housing in Derby.

Sixteen young trees were planted on the green at the corner of Merrill Way and Chellaston Road, close to the War Memorial Village in Allenton. Varieties included hawthorn, rowan, maple, oak, walnut and birch. Over the next few months, trees will be planted in 17 locations across the city to commemorate the centenary of the 1919 Housing Act, sometimes called the ‘Addison Act’.

This Act, which was originally intended to provide homes for soldiers returning from the First World War, gave local councils the power to build houses on a large scale. In Derby, the first council houses were built on Victory Road, with tenants getting the keys in 1920. Derby now has just under 13,000 council homes, spread across the city and managed in partnership between the Council and Derby Homes.

The original passage of the Housing Act was marked in a similar way, when the Health Minister Dr. Addison helped to plant an oak tree on Bristol’s Sea Mills estate, in June 1919. This tree is now known as Addison’s Oak and is still standing, 100 years later.

The 100 trees (actually 101) are planted in addition to a further 50 or so trees that are replaced on housing land each year. You can view all the sites on this public Google Map. Trees bring real benefits to our estates and the health and wellbeing of residents. By planting extra trees with a range of species across the city, we’re supporting the council to enhance the appearance, character and diversity of our city’s vital green areas whilst also creating a healthier environment.

Planting new trees is a great way to commemorate 100 years of council housing in our city. When the first homes were built in Derby, they were about providing a roof over people’s head and healthier places to live. Today, council housing is about developing the community as a whole: ensuring that neighbourhoods are clean, safe, and enjoyable. Hopefully, in another 100 years’ time, the trees planted today will still be here and still be enjoyed by the people living in Allenton.