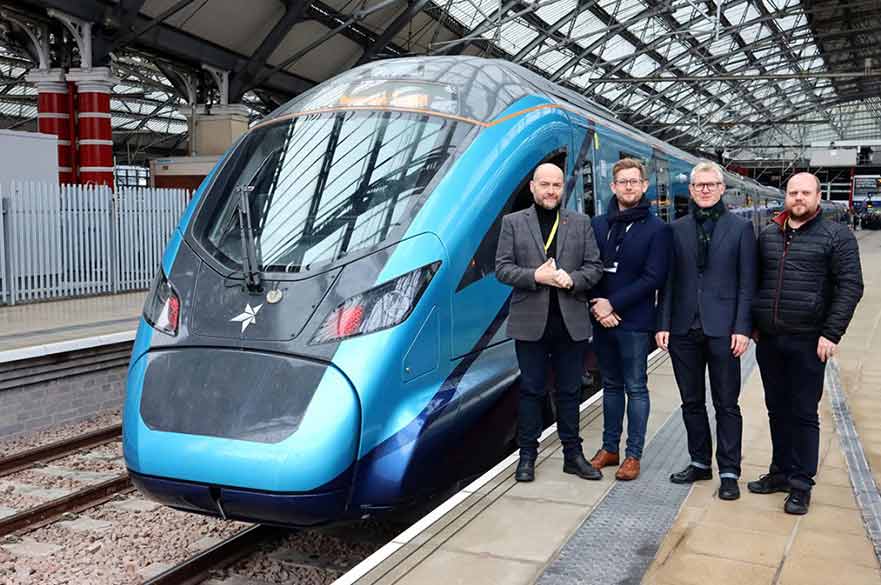 Staff from DGDesign next to a Nova fleet train

Product design and development specialists DGDESIGN, which have been based at Friar Gate Studios on Ford Street for the past decade, are part of the project team that has created the Nova Fleet, a new collection of state-of-the-art trains that are set to transform rail travel.

The Nova Fleet comprises of three new bi-mode trains which can operate using either diesel or electric power, and was recently launched at Liverpool Lime Street Station.  Nova 1, Nova 2 and Nova 3 will operate on inter-city corridors in the north of England, increasing capacity by more than 80% across its network.

DGDESIGN supported First Group with its successful TransPennine franchise bid in 2015 and was subsequently brought in to support the project during the mobilisation and development stages with the detailing and implementation of the exterior and interior design.

The company’s work encompasses the design of all passenger facing aspects of the fleet’s refurbishment and new rolling stock programmes. It also expands into station-related customer service points including lounges, ticket offices and waiting rooms.

DGDESIGN has also worked with First TransPennine’s Customer Experience Team to oversee the development and introduction of a new exterior and interior colour palette across the TransPennine Express (TPE) rolling stock fleet and assist with station environment upgrades and customer interface points.

David Gordon and his team were invited to Liverpool Lime Street Station for the official launch of TPE’s three new NOVA fleets. Commenting on the launch, David said:

After years of work, from initial concept to final production definition, it’s great to see the new fleets in service. We are proud of our association with the project, which is set to transform rail travel across the North.

David and his team are one of our most long-standing tenants at Friar Gate Studios. They create amazing designs for transportation all over the world, so it’s great to see one of their projects arrive a little closer to home.

DGDESIGN was formed in 2000 by David Gordon, and have worked an a number of high profile projects including Bombardier’s ZEFIRO VHST (Very High-Speed Train), Personal Rapid Transit pods for Heathrow Airport, Scotrail’s HST and Singapore’s Metro.

DGDESIGN are based at Friar Gate Studios, the headquarters of the multi-million pound Connect Derby project, which brings together Derby City Council’s workspaces under one banner to create jobs for local people.

Connect Derby provides micro businesses, entrepreneurs and SMEs with the high specification working environment, IT infrastructure and business support they need to develop.

For further information about the range of office space available at Connect Derby, visit their website or contact Sonia Kang by email or on 01332 742800.