Anniversary of the Knife Angel’s visit to Derby 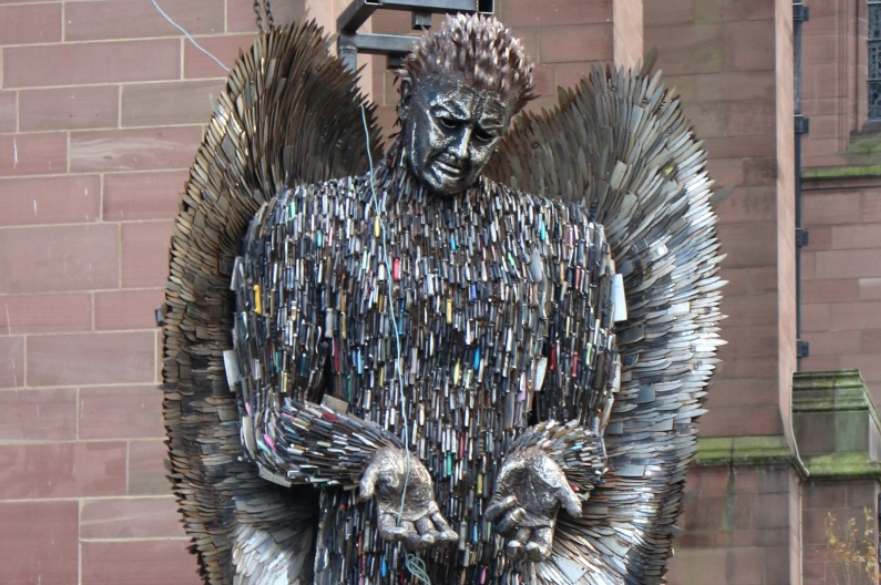 Today, Thursday, 1 October marks the one-year anniversary of the start of the visit to Derby of the Knife Angel.

A short film has been prepared to highlight the successes of the visit.

The film features the voice of Rachel Webb, whose son Tom was killed in Derby in January 2016, as a result of a knife attack. Her words are taken from an interview she gave to BBC Radio Derby at the time of the visit.

It includes the following facts:

Derby Cathedral were humbled and honoured to host the Knife Angel in Derby. The perseverance and hard work of key partners, generous sponsors and wonderful volunteers brought the project together in a way which benefitted the many thousands of visitors who experienced and were affected by the statue. The educational and public events enabled the successful delivery of the key outcomes to educate and raise public awareness of the horrors of knife and violent crime.  We are very grateful to every individual involved, and keen to support the ongoing legacy of the Knife Angel in Derby.

A year on since the visit of the knife angel I look back and feel really proud of what was achieved during that time by all involved, the number of visitors was incredible. I have spoken to a number of people that attended who said what a real sense of emotion they felt, thinking about all the people that have lost their lives due to this senseless crime. The carrying of knives is still an issue in society and as part of the legacy of the knife angel’s visit we continue to work tirelessly as a police service, with our partners and the community, to tackle the problem.

It would be hard for anyone who saw the Knife Angel not to be moved by it. It is a potent symbol of a blight that is sweeping the nation, but also acts as a catalyst for change. I hope that by bringing it to Derby we have started conversations, and not just in education settings but also in homes. I firmly believe that it is only through talking that we are going to stand a chance of breaking the cycle of escalating violence. It is only through talking that we can understand why people feel the need to carry weapons to protect themselves. It is only through talking that we can stop this needless loss of life. As PCC for Derbyshire I am immensely proud to have been involved as part of the team that brought the Knife Angel to Derby, the first city in the East Midlands to host the statue, and hopefully helped start those all too important conversations.

It was an honour to host the exhibition and we would like to thank everyone who played their part in ensuring people came to learn of the heartbreak knife crime brings to communities. It was only made possible by the partnership we have with Derbyshire Police and the Police and Crime Commissioner of Derbyshire, and the hard work they and the volunteers put in, to overseeing an event attended by 200,000 people. It was a powerful and moving reminder of the devastation that knife crime causes, not only to the victim but to their loved ones. The Knife Angel may have left the city but the lessons we learnt from it will continue. We intend to invest the £3,000, that we gave to managing the event and was not spent back into tackling knife crime in the City. The money will be used to educate and divert young people away from violence. It’s a fitting tribute to the Knife Angel to help youngsters achieve a peaceful future, one where knife crime is no longer a reality.