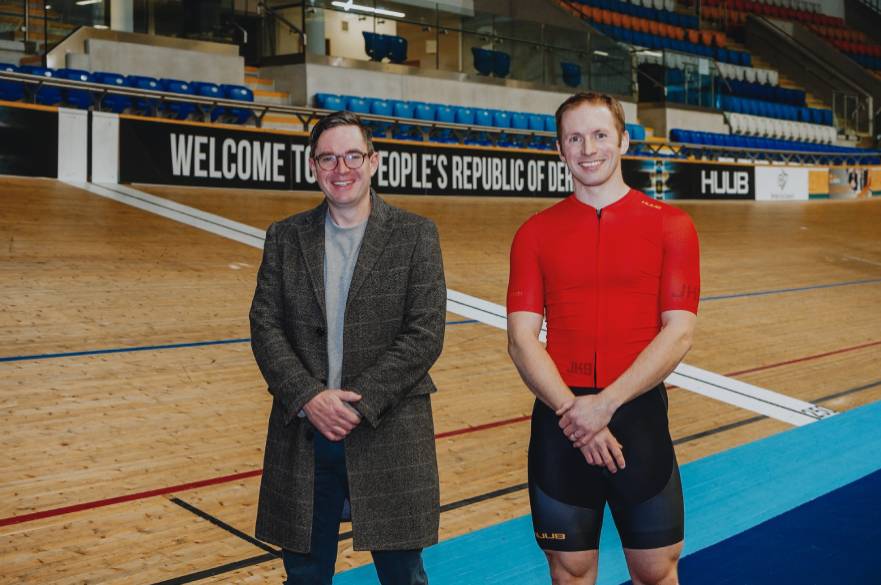 Cyclist Jason Kenny, Britain’s most decorated Olympian, made a return visit to ride the track at Derby Arena and says he plans to return soon.

His seventh gold medal at the Tokyo games this summer brought his total Olympic medal tally up to nine. He was at the arena to launch his new JK9 Line of cycle wear, which he has developed with Derby performance sportswear specialists HUUB.

As part of his visit he joined two of arena’s expert coaches at the velodrome to help lead a track session.

It was a privilege to welcome Jason Kenny to Derby Arena. The success he’s achieved as a member of Team GB’s cycling team is phenomenal and an inspiration to every young cyclist in our city.

It was also a day to celebrate the creativity and innovation of businesses in Derby. HUUB go from strength to strength, using the latest in sportswear technology to help all athletes achieve their best performance, no matter what level they’re at.

I raced here a few years ago when it first opened. I know it’s very well used and hopefully we can come here and build on that.

About his association with Derby based HUUB, he added:

It’s been really exciting to be involved in creating this new range for HUUB and I’ve been able to give my input throughout the process, even down to the finest details.

Fellow cycling heroes who have been seen in action at the velodrome include Dame Sarah Storey, Sir Bradley Wiggins, Britain’s most decorated female Olympian Laura Kenny (who is married to Jason), and paracyclist Katie Toft.