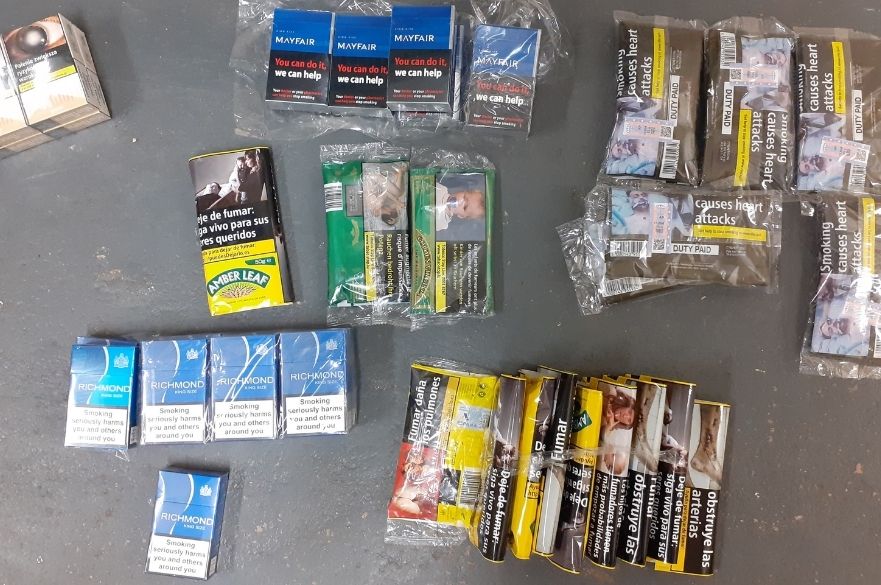 Illegal cigarettes and hand rolling tobacco were seized and evidence of other hides were found during visits in the city centre and Normanton areas of Derby. The operation was undertaken as part of Operation CeCe, which is a National Trading Standards initiative in partnership with HMRC to tackle illegal tobacco. Officers were assisted by tobacco detection dogs Jack and Frankie.

Tobacco in the UK must be sold in plain packaging but Trading Standards are seeing counterfeit plain packaged tobacco entering the market as well as more colourful packaging intended for non-UK markets. The City Council’s Trading Standards team continue to work closely with HMRC and Derbyshire Constabulary to tackle the sale and supply of illicit tobacco in the city.

The team were joined by Council Deputy Chief Executive Rachel North, who said:

“It’s really good to come along and see the team in action on operations like this and to learn.
It’s also a great opportunity to talk to our partners in the Police and other services to find out how we can be even more effective in tackling the illegal tobacco trade in the city.”

“Our Trading Standards team is playing its part in tackling this trade which has a complex profile and links to organised crime. The trade in Illicit cigarettes steals business away from legitimate retailers by undercutting costs set by Government and Illicit cigarettes often present a fire risk as they do not go out when left unattended.
“We will continue to clamp down on the illegal sales of such goods and ensure the people in Derby are safe from traders who break the law.
Should members of the public wish to report the suspect sale of illicit cigarettes confidentially they can do so through Crimestoppers on 0800 555 111”