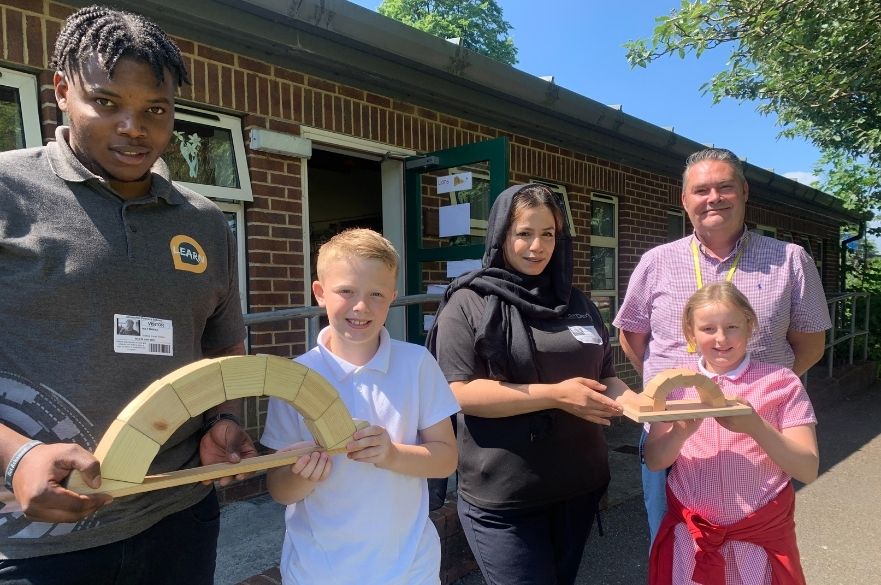 Primary school pupils in Derby have recreated the iconic A52 footbridge which dominates the city skyline – with help from industry experts.

Youngsters who attend Cherry Tree Hill Primary School in Derby virtually welcomed experts from the transport industry – including an RAF aircraft engineer – who tasked them with emulating the £7.2m bridge which connects Chaddesden and the commercial areas at the Wyvern centre.

The Year 4 children – aged between eight and nine - were taking part in a careers day organised by the Our Future Derby team. They also received a visit from Lieutenant Colonel Keith Spiers.

We have to open the children’s eyes to the world of work at primary school. They need to have a careers-path as part of their educational journey.

We try hard with our younger children to instil in them everything which employers are looking for; teamwork, presentation, working together. If we’re not careful, we don’t talk about careers until they’re 16 or 17 years old.

It’s really important that we get it right at primary level, so that they start to think about their future at such an early age.

We have all enjoyed looking at different types of engineering, which is brilliant as a lot of the children didn’t realise how much is in engineering and the various jobs which they could do.

We’ve been building bridges, working on the skills they need to be engineers but also skills which they’ll need anyway, whatever job they choose to do.

There was lots of problem-solving, listening and working together involved. The children were really engaged and so inspired by the session. They got so much from the session.

The children are only eight and nine years old at, at the end of the session, they were asked if they would consider a career in engineering and half of them raised their hands. “It was children who, at the beginning, didn’t have any idea what engineering was and what, potentially, they could do with their lives. A lot of the quieter children put their hands up, too, so it was brilliant to see them putting their hand up.”

We have great companies here in Derby, such as Rolls-Royce and Toyota, and the Our Future Derby session has helped to open their eyes to what jobs are out there.

Nine-year-old Jackson Manning – who would like to be a policeman when he grows up - said he found the day “really fun and exciting” while Isabelle Booth, also nine, added: “I would like to do the bridge building day again. We learned lots about the different designs of the bridges.”

The project was launched in 2019 by Derby City Council and is funded by the Department for Education’s Opportunity Area programme. Our Future Derby is delivered by Education and Employers, Learn by Design and DMH Associates. The project has recently been extended to continue until August 2022.

Its aim is to inspire and connect youngsters across the Derby Opportunity Area – which includes Boulton, Chaddesden, Derwent, Normanton, Sinfin and Abbey - with the world of work, opening their eyes to their future possibilities through a series of engaging activities.

Opportunity Areas are social mobility cold spots where the Department for Education is prioritising resources and bringing local and national partners together. Derby was identified as an Opportunity Area in October 2016.

Its impact is being closely evaluated and led by Dr Deirdre Hughes OBE, director of DMH Associates. She said:

What makes the Our Future Derby initiative special is the planting of seeds of hope. Children, parents, teachers and employers working together in local communities to gain a better understanding of the changing world of work.

Research shows that children’s aspirations are often shaped, moulded and restricted by gender stereotyping, socio-economic background and the people they meet in their local area. We will continue to examine what works and what needs more to be done to improve children’s life chances for a successful future.

For more information on becoming a volunteer, visit the Inspiring the Future website.