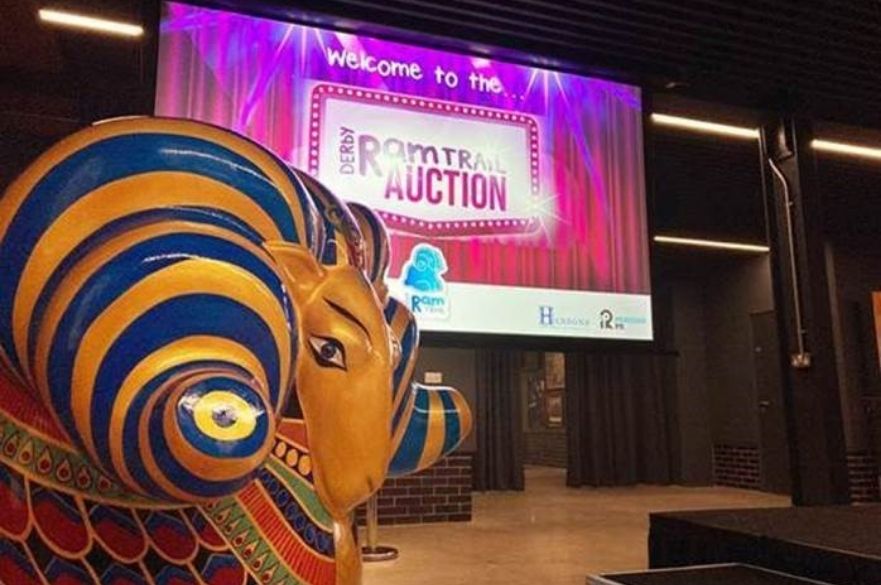 Thirty colourful large ram sculptures from the popular Derby Ram trail went under the hammer last Thursday night at the Museum of Making. The trail has raised over £150,000 and this will be matched by The National Lottery Heritage Fund contribute over £300,000 for Derby Museums’ Endowment.

Tensions ran high in the room as each ram went up for auction with a couple of the rams reaching prices of over £10,000! The rams will now go to their forever homes and although most will go to private locations a number will remain on public display.

The exciting evening was hosted at the new Museum of Making at Derby Silk Mill and began with a prosecco and canapé reception with the auction hosted by BBC Radio Derby’s very own Andy Twigge and local celebrity auctioneer Charles Hanson auctioning off the rams.

The proceeds from the auction will be doubled with match funding from the National Lottery Heritage Fund and donated to Derby Museums’ Endowment, helping to care for Derby’s important heritage to inspire our future generations.

The successful fundraising from the Derby Ram Trail means that Derby Museums has now raised over £750,000 towards its £1m Endowment Campaign target with the final £250,000 needing to be raised by September 2022 to make the most of the match funding grant from the National Lottery Heritage Fund.

“We are delighted with the total raised from the auction which exceeded our expectations and will make such a fantastic contribution to our Endowment target, helping to secure our future so we can continue to keep our museums free to inspire the generations of the future.”

“Thank you to all sponsors, artists and visitors for their commitment to making the trail such a fantastic success after such a difficult time.”

“As one of the first Wild in Art Trail auctions to take place after the lockdowns it is fabulous to see how the city has taken the rams to their hearts and supported the auction.”

“We were thrilled to be part of such an exciting night and support Derby Museums’ fundraising achievement.”