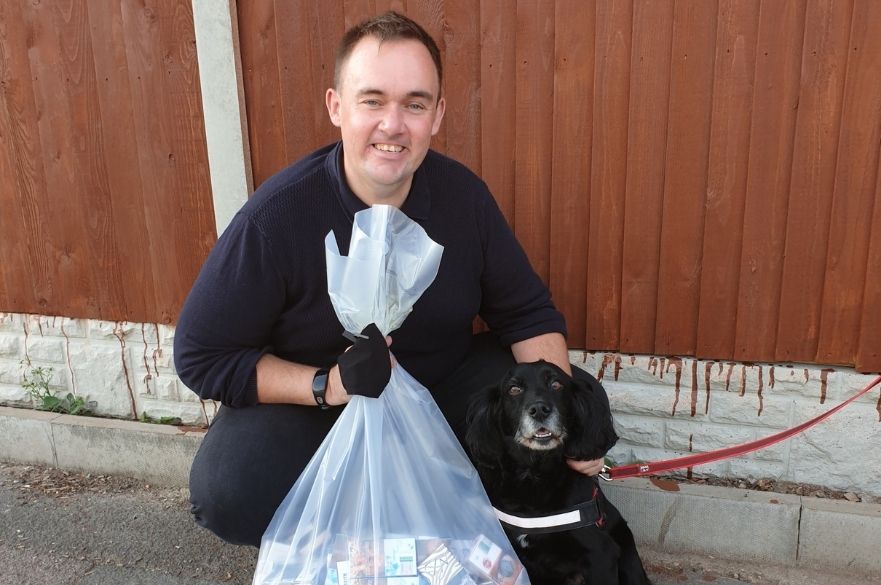 Councillor Smale with a sniffer dog and seized illicit cigarettes

The visits were undertaken as part of Operation CeCe, a National Trading Standards initiative in partnership with HMRC to tackle illegal tobacco.

On Tuesday 21 September and Thursday 23 September, the team visited seven shops across the city. The shops were searched, with help from the sniffer dogs, to find concealments of tobacco and cigarettes. In one shop, products had been concealed in boxes made to look like speakers. These empty boxes were used to transport the illicit products into the premises and then displayed within the shop. In other shops, concealments were discovered in walls, behind shelving and in hidden drawers.

In total, 18,220 cigarettes and six kilograms of tobacco were seized, further disrupting the illicit trade in the city.

Tobacco in the UK must be sold in plain packaging, but Trading Standards are seeing counterfeit plain packaged tobacco entering the market, as well as more colourful packaging intended for non-UK markets. Ultimately, the sale of illicit tobacco products hits taxpayers in the pocket as duty is not paid. Even more concerning is that some counterfeit tobacco products have been found to contain rat faeces, sawdust, lead, arsenic and even dust and detritus swept up from floors where the products are produced.

The City Council’s Trading Standards team continue to work closely with HMRC and Derbyshire Constabulary to tackle the sale and supply of illicit tobacco in the city.

“The trade in illegal tobacco harms local communities and affects honest businesses operating within the law. The National Trading Standards initiative in partnership with HRMC is playing a significant role in disrupting this illicit trade and is helping to take illegal tobacco products off the streets.”

“I was thrilled to join the team on Tuesday to get a full picture of all the hard work that happens to keep consumers safe from illicit and counterfeit products in the city. The illicit tobacco trade isn’t a victimless crime and recent prosecutions by the Trading Standards team shows that we will not tolerate this kind of activity in our city. I’d urge residents to report the sale of these items to us via Crimestoppers, Action Fraud or Citizens Advice.”

Residents can report the suspected sale of illicit cigarettes and tobacco confidentially: