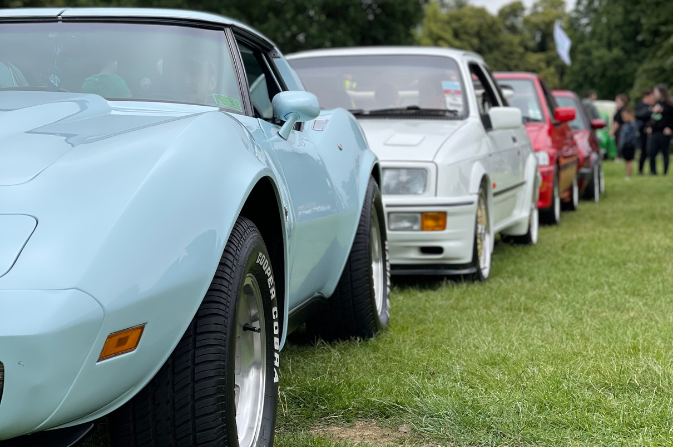 With thousands in attendance, this year's Derby Retro and Classic Car Show on Sun 3 July was a smashing success as enthusiasts from all over the country brought their noteworthy automobiles to Markeaton Park for music, refreshments, ice cream, and most importantly, to display their sporty, stylish, and spotless vehicles!

There was a myriad of elegant, modified, and traditional styles on display. The show featured everything from the sleek Rolls Royce to a Toyota Pickup truck with a new innovative name.

The owner of a blue, but somewhat beaten-down, VW camper van received the Rust and Grime award. Instead of adding new paint, the effect is purposefully created by lacquering the exterior layer as is. The van outperformed the competition by a wide margin and caught the judges' attention with its distinctive and appealing appearance!

The Best Paintwork Award went to a stunning Pearl red VW Mk2 Golf GTI; the exterior, interior, and engine block were all in pristine condition and gleamed throughout, drawing a lot of attention from the crowd.

Best in Show was awarded to the owner of a bright red 1959 Cadillac Coupe de Ville. At 63 years old this Cadillac could still turn heads!

Winning the award for the Best Pre-60s car was a 1959 Green Land Rover, which in its day was acclaimed for its simplistic and functional design.

The Best 1960s award was rightfully claimed by this iconic 1964 Gold Jaguar Mk2. It was designed to embody the ideals of grace, pace and space and was the car of choice for Inspector Morse!

Winning the prize for Best 1980s, a 1986 White Sierra Cosworth. A high-performance variant of the Ford Sierra, built by Ford Europe as part of a Ford Motorsport project with the aim of creating an outright winner for Group A racing in Europe.

While attendees explored the incredible collection of automobiles, live bands and DJs kept the crowd entertained, bringing a happy, upbeat mood to the day. Lady Rose, The West End community choir, Hannah Fay and The Indie Division all brought their own unique styles to the stage ultimately giving the day a summery, festival-like feel.

Alongside the music and wheels were family-friendly entertainment including Zorbs, an inflatable maze and face painting, and a fully licensed bar for the adults!

Markeaton Park also saw children enjoying performances of Pop-Up Fairy Tales in the Craft Village, just a stone’s throw away from the Retro and Classic Car Show, as the event coincided with the start of the Outdoor Theatre and Cinema Season. Other park amenities enjoyed by visitors included the Paddling Pool, Mini Golf, Bouncy Castle, and Pedalos.

‘It's wonderful to see Derby host such a well-planned event, where many people travel great distances to display their vehicles, which are frequently their pride and joy. The live music on offer and many children's activities added energy to the day and gave a certain buzz to the atmosphere.’

You can find out more about what’s on in our Parks and outdoor spaces on InDerby or Derby Live.