A new splash of colour for Alvaston canal path 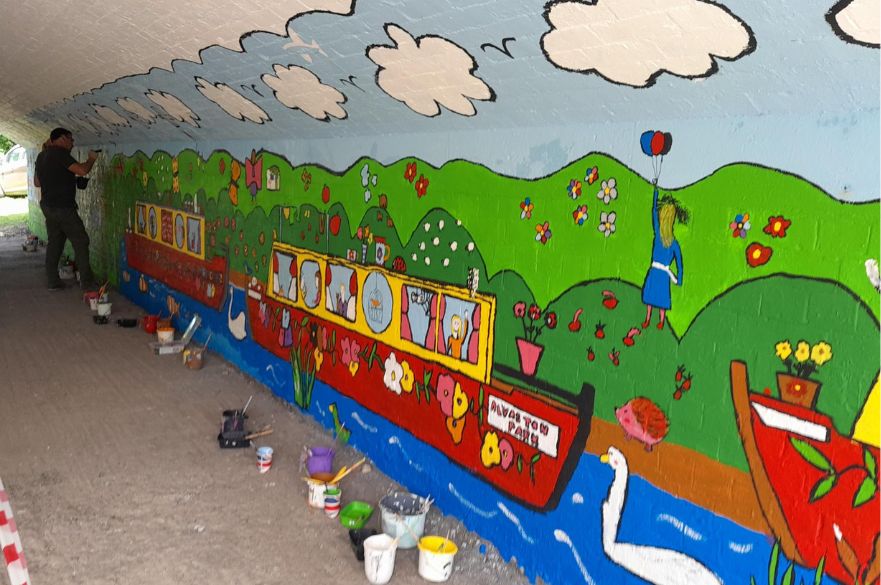 The project was a collaborative effort within the community

A large colourful mural has been lovingly painted on the underside of the canal bridge off London Road.

The Alvaston Park Friends have been hard at work recently to add a splash of colour to the canal bridge which is located on London Road next to the Wickes store. The project began earlier this year after the former mural, thought to have been painted in around 2008 by local school children began to fade.

After the issue of a seemingly ‘uninviting’ part of the city was raised by a local resident, Alvaston Park Friends set to work. The area was initially cleaned, with the remnants of the old mural being removed and the general path arena being tidied to provide a new group of pupils from local schools a fresh new surface to be creative with.

With such a huge task in front of them, the Alvaston Park Friends enlisted the help of lots of different local people and groups to make this project a reality. They would like to thank everyone for their hard work, supplies and general contribution to the local area.

To begin the project, John Stones Paints Limited kindly provided the white primer masonry paint, while Riverside foundation in partnership with Bells Group provided the workforce for clearing the area and painting on the primer. Alvaston Park Friends and community volunteers painted the artwork for the mural along with Lakeside Primary School Year 6 pupils and a volunteer from Interteck and Riverside. What a fantastic job they all did!

Arnold-Clarke generously provided a £1000 grant for paint and personal protective equipment for the mural while our internal Structures team provided £1500 funding for the anti-graffiti paint. Rolls-Royce Nuclear Submarines provided the labour for painting the anti-graffiti paint onto the area which will protect the mural and help to keep it clean for many years to come. The Derby Parks team also helped to organize the activities on these days with Alvaston Park Friends.

Designed by local community members, the now-finished mural has one side focusing on a mandala artwork style; whilst the other side features nods to the history and wildlife of the former canal path. The new artwork has opened-up and brightened the pathway to give the area an all-round more approachable vibe. Children and adults alike are now frequently stopping and enjoying the new artwork while passing through.

If you’re looking for a summer activity for the children, come along to Alvaston and have a look. There are some hidden challenges and items of interest to look for whilst travelling under the bridge. These include counting sheep, spotting the highland cattle and ‘Nemo’ the clown fish even makes an appearance!

We’d like to say a big thank you for everyone’s hard work and support on the mural project. It’s great to see such a vibrant piece of art be created through such an amazing community effort in the city, and in perfect time for the summer.

It was a delight to be a part of this project! The Community spirit and support of all the volunteers was amazing! A dark, dismal area is now beautiful and bright; a welcomed improvement for the community.