Mayor of Derby commemorates 40th anniversary of the Falklands War 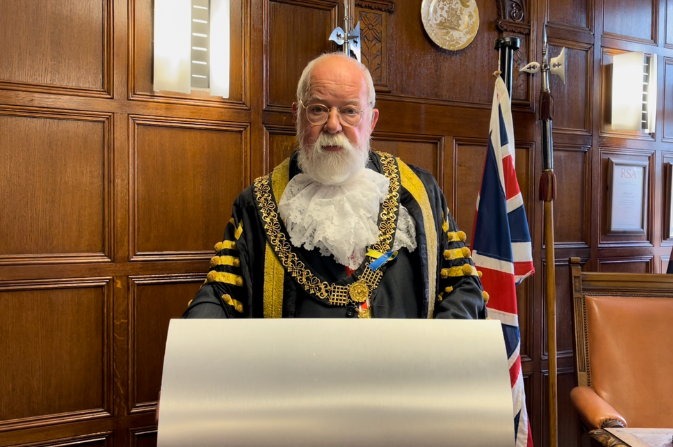 Lasting for 74 days, the Falklands War was the first military action since the Second World War that utilised all elements of the British Armed Forces.

Following the invasion of the Falkland Islands by Argentina on 2 April 1982, the British government dispatched a naval taskforce of 127 ships to take back the islands and support the islanders right to self-determination.

The ensuing conflict led to over 900 deaths and almost 2,500 wounded, with significant losses incurred aboard HMS Sheffield when it was struck by a missile and the sinking of the Argentine vessel, ARA General Belgrano.

The land battles that formed part of the recapture of the islands would be fought on windswept and featureless terrain and would become renowned for acts of extreme courage and fortitude, as British troops marched more than 50 miles across the islands carrying 80 pounds of equipment each.

With the capital of the islands surrounded, Argentine forces surrendered on the evening of 14 June 1982.

On the 40th anniversary of the end of the conflict, we remember all the British Servicemen and civilians that served as part of the taskforce, and especially those who gave their lives in service to their country. We pay particular tribute to two men from Derby, who were part of the 255 British personnel who lost their lives:

We also must reflect on the sacrifices of those veterans and their families who still live with the consequences of the conflict today.

In commemoration of the anniversary, Derby City Council will be flying the flag of the Falkland Islands in the Sir Peter Hilton Memorial Gardens throughout Tuesday 14 June.