Bold plan to Level Up Derby 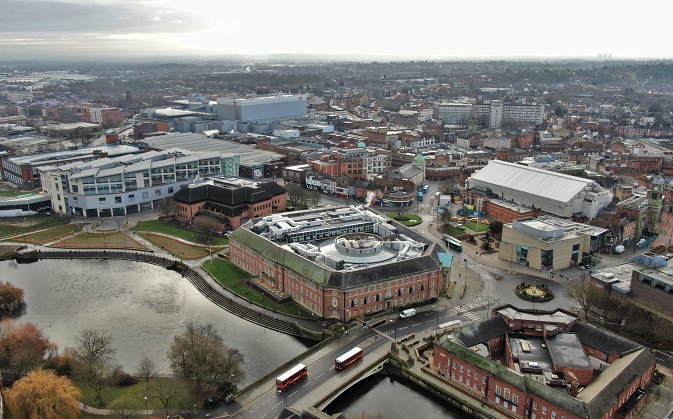 Three key city sites have been announced as part of plans to Level Up Derby. They include a new Theatre on the Assembly Rooms site, a premium hotel at Becketwell and the redevelopment of the Friar Gate Goods Yard into work and living space. The bold proposals would be a step change towards creating a successful and dynamic city centre.

Subject to sign off by the Council’s Cabinet the three sites will be submitted to Government to receive funding as part of the second round of the Government’s Levelling Up Fund (LUF). All three redevelopments are widely supported locally and each of the key sites will be sponsored by a Derby MP.

We know to Level Up Derby, tinkering around the edges is not going to be enough. We need to deliver a step change to create a successful and dynamic city centre.

These three projects can unlock Derby’s potential. Linking with other redevelopments already in the pipeline they will give confidence to local businesses, investors and external funders. This will lead to further investment into the city.

It is a transformative and ambitious package put together by the public and private sector, but it needs the Government to come to the table as well. All of this cannot be delivered without Government backing.

Assemble would be a new learning theatre constructed in partnership with University of Derby on the key city centre site of the former Assembly Rooms. It would use culture to regenerate the area bringing events and activity to the city centre. The new theatre would contribute to Derby’s City of Culture 2029 bid.

Assemble would increase the scale and appeal of Derby Theatre’s locally produced content, attract a variety of toured works.  It would also build on artist development programmes, embed a research hub into the organisation and enable them to expand and develop the theatre’s youth, community and outreach programmes.

The project would increase theatre attendance by 83,000 and attract an additional 25,000 visitors to Derby each year. It would also generate a net additional £1.7m per year for the local economy.

Derby City Council would lead the development of the venue which would be operated by Derby Theatre which is a subsidiary of University of Derby. A Levelling Up Fund bid of £20m is proposed for this project, delivery of the project would also require Council borrowing.

Despite strong corporate demand, Derby city centre currently lacks a premium quality full-service hotel. A new hotel would be a boost for the city centre, capitalising on visitor demand from the delivery of the 3,500 capacity Becketwell Performance Venue. It would also add value to Derby’s business community especially the larger global companies with a strong local presence, including Rolls-Royce, Toyota and Alstom. The hotel would be delivered in partnership with St James Securities.

At this stage, the bid assumes a LUF allocation for up to £15M, and delivery of the project would also require Council borrowing. However it is anticipated that operation of the hotel will generate a net revenue income stream for the Council, which should offset some or all of the costs of borrowing.

We are delighted to be working with Derby City Council to bring forward the delivery of a much-needed upper mid-scale hotel to the city and are working with the council on their bid for Levelling up Funding.

Phases one and two of the Becketwell scheme are already underway, with 259 one and two-bedroom build to rent apartments set to come on stream in early 2023 and demolition work in progress for the exciting new 3,500 capacity performance venue.

The Becketwell scheme will provide Derby city centre with a mixed-use development of regional significance, which will be enhanced by the delivery of an upper mid-scale hotel.

Friar Gate Goods Yard is a major high profile regeneration opportunity in the north of the city centre being brought forward by Clowes Developments (UK) Ltd. The development proposals consist of a mixed-use development including workspace, residential units and green space. It will bring Friar Gate Goods Yard back to life and develop a scheme which Derby will be proud of whilst restoring some of the city’s most iconic historical buildings

The council will apply for funding to renovate Friar Gate Bridge to create new active public space and invest in the City’s heritage. The scheme would refurbish Friar Gate railway bridge and restore this superb listed Victorian structure to being a fitting gateway to the city centre.

The Council’s Cabinet meeting to consider the bold proposals to Level Up Derby is on Tuesday 5 July.