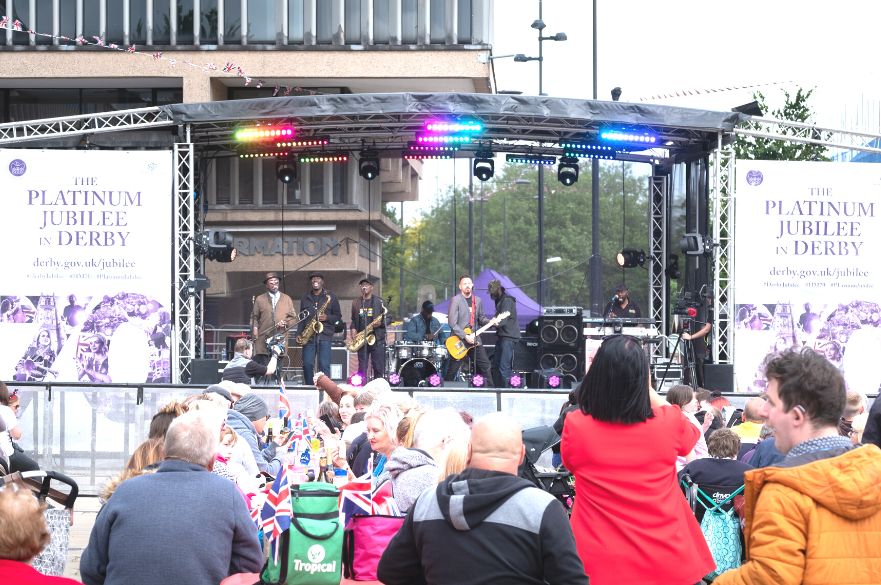 Crowds gather in front of a stage on the Market Place. Image credit: Graham Whitmore

Over the special bank holiday weekend, thousands flocked to the city centre to join in with the historic Queen’s Platinum Jubilee Celebrations.

The celebrations officially started on Thursday 2 June with a beacon lighting ceremony held on Cathedral Green in the city centre. Over 1,000 people gathered around the Bonnie Prince Charlie statue to see the ceremony led by HM Lord Lieutenant of Derbyshire Mrs Elizabeth Fothergill CBE. At 9.45pm she joined others who lit over 1,500 beacons simultaneously across the UK.

You can catch all the highlights of the beacon lighting ceremony in our video.

On Saturday crowds flocked to the city centre and lined the streets to watch troops from the Royal Engineers (170 Infrastructure Support Engineer Group). Troops, led by a marching band paraded from Cathedral Green along Full Street and onto Corporation Street. At the Council House they gave a Royal Salute to the Lord Lieutenant and their Commander, Colonel Gavin Hatcher OBE, commanding officers, The Mayor of Derby and High Sherriff, followed by the National Anthem.

To mark The Queen’s Platinum Jubilee, a special commemorative medal was awarded to troops who had more than five years of service on Ascension Day. These were presented to troops during an inspection by HM Lord Lieutenant of Derbyshire, the High Sherriff of Derbyshire, Michael Copestake and Mayor of Derby, Councillor Robin Wood.

Acting as a token of the nation’s thanks, the Platinum Jubilee Medal follows a long history of awarding medals to mark Royal Jubilees, with the first one awarded to mark the 50th anniversary of Queen Victoria’s reign in 1887. Medals were also awarded to members of the police, fire, emergency services and prison services.

Following the parade, thousands joined in the celebrations on the Market Place, hosted by Jack Tymon from BBC Radio Derby. The stage show had performances from some the best British tribute acts including The Beatles by The Plastic Beatles, UB40 by Ultimate 40, Spice Girls by Spicey Girls and Little Mix by LMX. There were also raucous renditions of ‘Sweet Caroline’ and even what was possibly Derby’s biggest ever conga line.

After the stage show, the party continued with a special screening of the Platinum Party at the Palace.

Despite the inclement weather, residents armed with picnics and umbrellas re-joined the party on the Market Place on Sunday afternoon for the Big Jubilee Lunch, hosted by Andy Twigge from BBC Radio Derby. Alongside Andy, an orchestra from Sinfonia Viva and singers provided entertainment with performances of songs from hit musicals like ‘The Greatest Showman’.

Outside the city centre, communities across the city came together for street parties in their local neighbourhoods.

“This weekend was such a thrilling tribute to Her Majesty and I am so proud to have been involved. All the events I attended were a true celebration of our remarkable Queen’s lifetime of service. I would like to give special thanks to all of those who worked so hard to make these celebrations such a success.”

Videos of all the events are available to watch online.