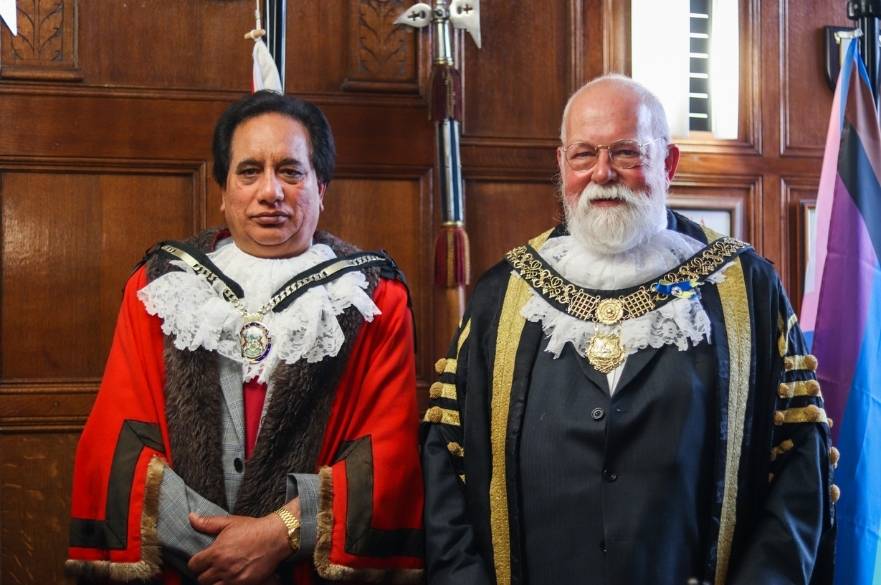 Councillor Robin Wood has been reelected as the Mayor of Derby after Derby City Council met on Wednesday 25 May for the annual Mayor Making ceremony and AGM.

The meeting was the first time councillors have come together since the local elections on Thursday 5 May and was also the first time the meeting has been held in the Council Chamber since 2019.

The Mayor Making ceremony takes place every year, with the incumbent mayor taking nominations for their successor. This year, the current Mayor of Derby Cllr Robin Wood was elected for a second consecutive term and his third in total, while Cllr Balbir Sandhu was nominated and elected as the Deputy Mayor of Derby for the second time, after previously serving in 2020/21.

Cllr Wood has previously served as Mayor in 1993 and is the longest-standing councillor in the city, having first been elected in 1979, and this was the 52nd Mayor Making ceremony he has attended!

The AGM followed later in the day, where the leadership of the council was decided. Cllr Chris Poulter was reelected as Leader of Derby City Council, having already served for four years, with Cllr Mick Barker remaining as Deputy Leader.

Cllr Poulter also named his cabinet for the next year, which is as follows:

I’d like to thank my fellow councillors for re-electing me for a third term, I am looking forward to building on the successes of the past year and meeting many more Derby residents over the next 12 months.

This year’s Annual General Meeting was very special, it was wonderful to have all councillors back in the Council Chamber for the first time since 2020, and welcome learners and students from the Derby Adult Learning Service and St Martin’s school who catered for us brilliantly!

Videos of the Mayor Making and AGM can now be viewed on the Derby City Council YouTube channel.