Derby to welcome Urban Forest on the Market Place 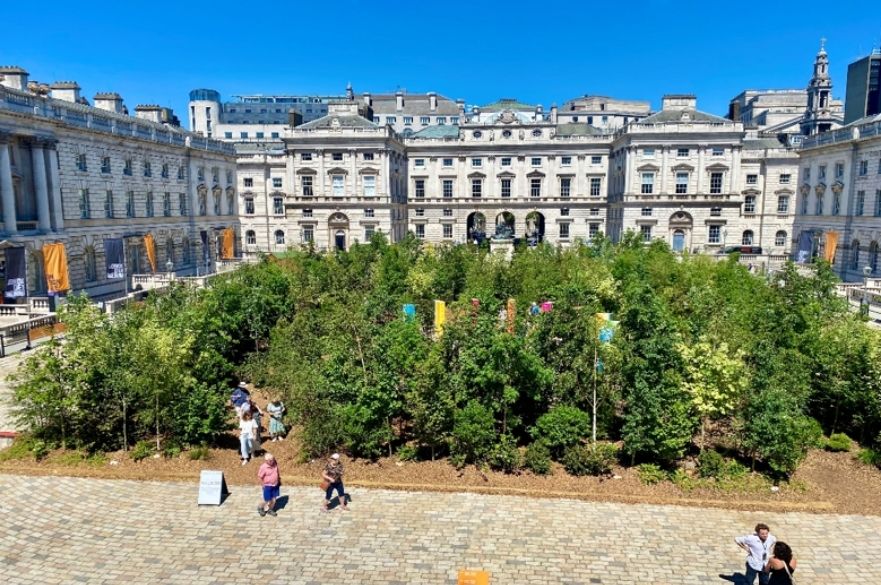 This is what the Urban Forest in Derby could look like. Image credit: Scotscape

From the end of June, the Market Place will be transformed into a woodland wonderland bringing a new, vibrant space for al-fresco dining and outdoor events over the summer. The space will be free to access for residents and made available to cultural partners to host events.

It will be just one of four Urban Forests in the UK this summer and the only one in the East Midlands.

For Derby’s Urban-forest, up to 125 trees and around 300 shrubs will be installed, covering most of the Market Place. Within the forest, a clearing will be created and picnic benches provided for city centre visitors to use for al-fresco dining. There will also be space for a stage so that the clearing can be used as a performance area.

The Urban Forest has been designed and will be installed by industry-leading Scotscape, who have created urban greening solutions across the globe, most recently at COP26 in Glasgow and the Forest for Change at Somerset House. Scotscape’s vision is to cover Towns and Cities with plants, nurture them and watch them grow so that a blanket of verdant green covers all our surfaces and watch the biodiversity follow.

It’s hoped that the Urban Forest will raise further awareness of climate change and the need to increase biodiversity in urban areas as part of the Council’s Green Derby agenda. As part of this, a local project called Down To Earth will be helping residents get to grips with urban greening and biodiversity through a series of pop-up potting sheds across the city centre.

The idea for an Urban Forest on the Market Place was dreamt up by Grounds Maintenance Officer and Derby resident, Karl Smith. He said:

Hosting an Urban Forest, it’s about more than just this summer, it’s about creating a legacy for the younger generations in the city. Within 10 years, the trees in our Urban Forest will be removing tonnes of Carbon Dioxide from the atmosphere, helping to tackle climate change. But, more than that, they’re helping to create more beautiful green spaces in the city which contribute to improved wellbeing and mental health for residents. I’m really proud to be helping bring this event to our city. It also gives a vision that urban planting in city centres can create a more vibrant and enjoyable environment.

The Urban Forest will bring a whole range of benefits to our city. In the short term, it will boost visitors to our city centre in much the same way that our Market Place offer did last summer. Longer-term, it will support the recovery of our economy and support our ambitious Green City targets. Over the course of their lives, the 300 new trees will bring economic benefits to the city, bigger than this initial investment. I can’t wait to see the forest in place!

We are very excited to be involved with the design and build of the urban forest at the Market Place in line with Derby’s Champion City Status .

It has been a while in the planning and required a fair amount of effort from those involved, especially Karl Smith, to whom we should be grateful.

It will bring an immediate oasis of green and an increase in Biodiversity to the Market Place but more importantly, the trees, as we have with our other urban forest projects, will eventually be planted in a local park to carry on their good work.

Installation is due to start on Monday 20 June with the Urban Forest opening at the end of June. It will be in place until the end of August.

Information about events taking place in the Urban Forest will be available on the Derby LIVE website.

Visitors to the Urban Forest are encouraged to use active and sustainable transport such as walking, cycling and public transport to reach the city centre.