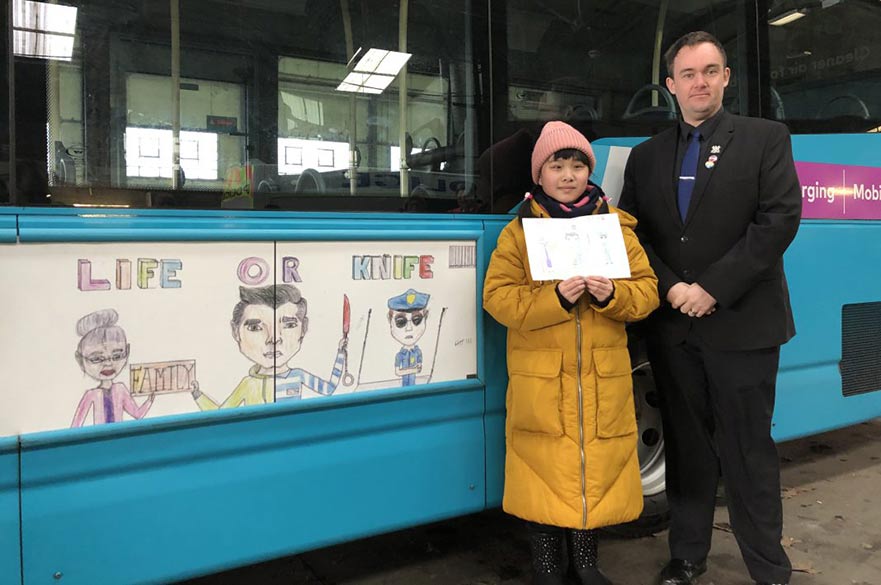 Derby City Council has been working with partners in the police, schools and Derby College to promote an anti-knife crime message across February in support of the re-launch of the Safer Derby City website.

In a joint project between DCC and the police on Derby East section, PC Charlie Watson and her colleagues from the Safer Neighbourhood Team have been working with pupils from Year 6 primary schools on a poster campaign with an anti-knife crime message.

DCC has also been working closely with Derby College to arrange a series of knife crime awareness days at three of their sites.

Across the days the students will be taken ‘off timetable’ to spend the day moving through different workshops to develop their knowledge and thinking around the risks and consequences of knife crime.

The days will include interactive presentations from a mother of a knife crime victim, a first responder, the police, a spoken word artist and a theatre production by Saltmine Trust.

Each of the days will run from 9.00am to 2:45pm and DCC’s Community Safety Team and police colleagues will be present on site throughout each of the days.  The sessions will be at the Roundhouse on Tuesday 25th February, the Joseph Wright Centre on Wednesday 26th February and Broomfield Hall Campus on Thursday 27th February.

The Safer Derby City website is a place for information, advice and support for young people and parents who live, visit or go to school in Derby.  There’s information about all sorts of things, from gangs to knife crime and anti-social behaviour to sexting and much more.  You can also find information about activities, groups, clubs and sports going on around the City too.

It’s so important for our children and young people to be aware of knives and gang culture, to help them spot the danger signs and keep them safe. The poster is fantastic and really drives home that stark choice some people will face. I’m looking forward to spotting it on buses around the city and hope that it will make others who see it stop and think for a moment about the choices they are making. I’m also delighted that we’ve been able to update and relaunch the Safer Derby City website. It really is valuable tool for parents and children and I encourage everyone to take a look.

Knife Crime is not something that one agency alone can solve so it has been really good for the police to work alongside others from DCC on this project.  More importantly it has been great to work with the children of our county and hear their voices. Initiatives like this involving our future generations are a great way to help people to recognise and understand the risks associated with carrying a knife. The workshops that are to be held will be very impactive for those that attend and they will then be able to share that knowledge with others. We all need to do our bit to stop knife crime and I’m pleased to see the enthusiasm of those involved in this work.

Aaron Denton, Head of Behaviour for Learning at DCG said:

Recent national events and the siting of the Knife Angel statue last Autumn in Derby city centre has focused everybody’s minds on the issue of knife crime. Positive citizenship is a key aspect of our mission as an organisation and the student body has welcomed the opportunity to be involved in this awareness-raising initiative. The workshops will focus on the impact and consequences of knife crime on people’s lives and will encourage students to think carefully about how they would react and respond to different situations.