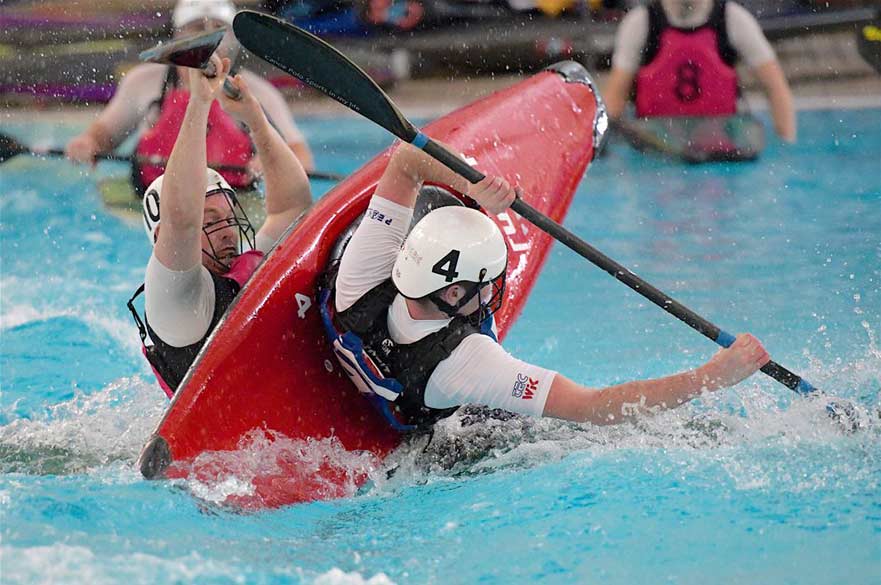 The inaugural Peter Mitchell 4-aside Canoe Polo Tournament saw some of the very best British teams travel from London, Hull, Leeds, Liverpool, Bridgend and Northern Ireland to compete at Queen’s Leisure Centre in Derby. The competition has been declared a success, with organisers hoping to make the tournament an annual event.

Peter Mitchell founded Viking Canoe Polo and coached the team to a record 11 British National League titles, and many victories in international tournaments. He was the team manager for the Great Britain Canoe Polo squad, and an influential member of The Scout Association, for which he was awarded an MBE.

Teams competed in senior and youth categories, cheered on by an eager crowd of spectators. Derby’s Viking Canoe Polo Club, which organised the event, took silver in the senior category. The joint winners of the senior category were Liverpool Canoe Club and Kayak Club – Friends of Allonby, while Kingston Canoe Club finished top of the table in the junior category.

Our vision was to bring the first national-level canoe polo tournament to Derby in memory of our club coach and founder Peter Mitchell MBE, who sadly passed away in October 2017.Peter dedicated his life to providing sporting and outdoor activity opportunities for others. We hope that the tournament will serve as a tribute to his legacy. We hope to make the tournament an annual event for future generations to enjoy.

The event was organised with the help of Queen’s Leisure Centre and sponsored by Pete Astles from Peak UK, a Derbyshire-based kayak equipment company.

Viking Canoe Polo Club holds beginners’ sessions at Queen’s Leisure Centre on Monday evenings from 8.30pm to 9.15pm. For more information get in touch via email or visit their website.