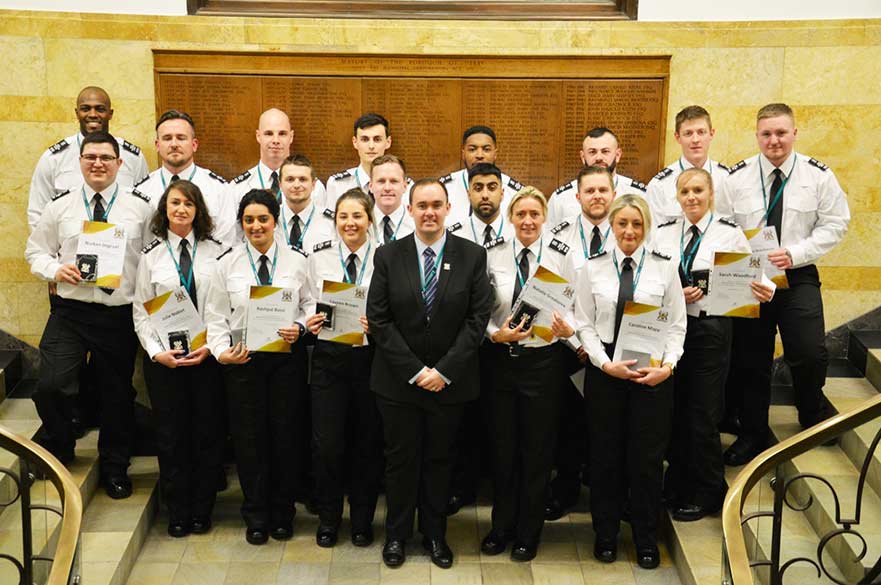 On Tuesday 21st January Derby City Council welcomed its new cohort of Public Protection Officers at an affirmation ceremony in the Council Chamber, in front of their family and friends, bringing the number in the city from 9 to 20.

Cabinet approved the proposal to increase the programme in March 2019. It was seen as a key priority after the introduction of a small group of officers in 2018 proved so successful in tackling environmental issues within Derby.  Since then there has been an extensive recruitment drive to bring in the right people, with the right skills and provide high level training to enable them to carry out this challenging and potentially dangerous job.

In the coming weeks the PPO’s will assigned to a specific ward as a named point of contact for any issues whilst there’ll also be an enhanced city centre presence. The additional numbers will also allow an expansion to include some evening and weekend cover.

In addition the officers will continue to tackle antisocial behaviour and environmental crime issues, such as noise, littering, fly tipping and dog fouling, they will also be given new powers for the first time to issue fines for parking offences to support our Parking Enforcement team.

Councillor Smale, Cabinet Member for Neighbourhoods and Streetpride is supportive of the proposals;

The increase in Public Protection Officers is great news for the city. Expanding this to all neighbourhoods throughout the city was a key priority for this council. Our existing uniformed Public Protection Officers have been very successful in tackling environmental issues within Derby. Whilst providing some additional hi-visible reassurance and supporting police colleagues, they have delegated Council powers to tackle issues that annoy the public and have a negative impact on our city. Dog fouling, fly tipping, littering and inconsiderate and dangerous parking are all issues that none of us want to experience. I'm looking forward to seeing these new Officers out on the streets and making as real difference in the community.