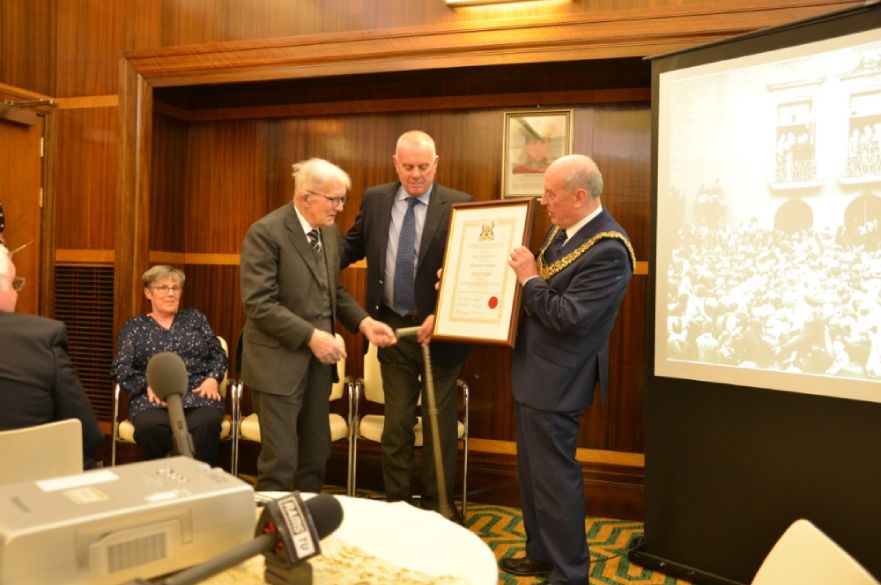 Derby City Council is saddened to note the passing of former Derby County footballer Reg Harrison, who was awarded the Freedom of the City of Derby in February 2019.

Mr Harrison was the last surviving member of Derby County’s 1946 FA Cup winning squad; he would make 281 appearances and score 59 goals for the Rams between 1944 and 1955.

Following his retirement from the professional game, Reg worked for Derby City Council’s Youth Service, establishing a youth centre on Stockbrook Recreation Ground, before moving to Chaddesden where he founded the Chesapeake Youth Football Club.

His contribution to public life was recognised when the Council resolved to award him the Freedom of the City of Derby; Reg and his family were guests of honour at a ceremony hosted at the Council House, which was attended by dignitaries from the football club.

The Mayor of the City of Derby, Councillor Frank Harwood, said:

I was fortunate as a young boy to play for Kingsway Dynamos: I remember Reg and the Derby County team came to our club meeting, bringing along the FA Cup. It was a great pleasure to meet Reg again during my year as Deputy Mayor. Despite the extent of his achievements, I was struck by his humility. Reg’s contribution to the city has been enormous – his work following retirement from professional football had an impact on so many young people, inspiring a lifelong love for the game and championing the benefits of an active lifestyle. As a Council, we would like to pass our condolences to Reg’s family and express our tremendous gratitude for the contribution he has made to the life of the city.