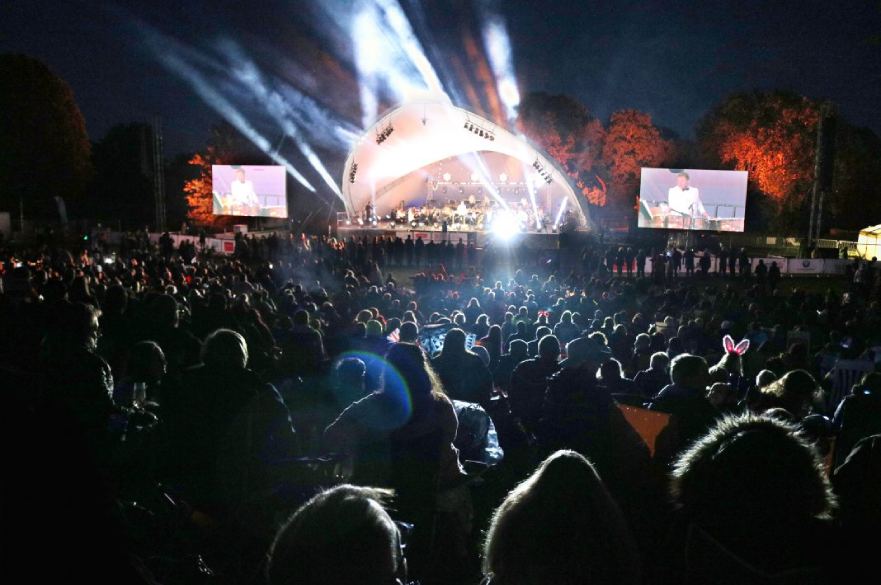 After the pandemic put a stop to plans for this year’s live concert, a new programme was broadcast simultaneously on BBC Radio Derby, BBC Sounds and BBC iPlayer which blended video footage of the 2019 concert with new recordings by Sinfonia Viva’s 7-piece cabaret band, led by conductor James Holmes and featuring vocalist Andy Quinn, and Derby Jazz.

Derby LIVE, Derby City Council’s arts and events arm, teamed up with Sinfonia Viva, the orchestra of the East Midlands, and BBC Radio Derby to come up with the innovative way of bringing The Hannells Darley Park Concert to audiences at home in the three-hour show.

The event was viewed or listened to on 7,000 devices – mobiles, TV, tablets, computer and gaming consoles – with 84% of the digital audience tuning in live. These figures, from the BBC, do not take into the account the number of people who listened to the show on radio, or the number of people who could be watching or listening to each device, so the actual audience figure is higher.

Audience members were encouraged to recreate the community atmosphere of the live Darley Park concert by engaging with the event online and on social media. The event webpage was viewed 8,400 times and a YouTube trailer was viewed 2,458 times.

A breakdown of web users shows that 33.5% of traffic was from Derby and 9.75% from Nottingham. London came next, followed by Burton upon Trent, and Belper. People also followed the event from Sutton in Ashfield, Long Eaton, Mansfield, Beeston, Ilkeston, Birmingham, Manchester, Leeds, Alfreton, Sheffield and Loughborough.

“Such happy memories of so many Darley Park concerts, we’ve been going for 25 years… hoping we’ll be back there in 2021.”

“Wonderful! Cool to see the musicians close up too.”

“Thanks to everybody who worked so hard and so skilfully to bring us such fabulous entertainment. You can never know how much it is appreciated.”

Ben Pope was the conductor who led Sinfonia Viva at the 2019 concert, which celebrated 1969 and Golden Anniversaries. He was the studio co-presenter with BBC Radio Derby presenter Andy Twigge for this year’s event.

This year’s Darley Park concert was so different from 2019 for obvious reasons – but everyone involved in #darley20 worked so hard to bring as much of the spirit of this special event to the public as possible given the restrictions faced. There’s nothing like a live audience, but the sense of community that Andy Twigge and I witnessed from the BBC Radio Derby studio was a true inspiration. The level of engagement via social media, Facebook, and text messages as they flooded into us was very moving – it reinforced what an important part Darley Park concerts play in Derby’s cultural life and how keen people were to get involved in spite of the circumstances. It was such a worthwhile endeavour, it was fabulous to revisit last year’s concert and to feel again the warmth of an audience through their messages and calls, and it was so important to the artists to feel that their continued involvement is so hugely valued.

Tickets are now on sale for next year’s concert, which will be at Darley Park on Sunday 29th August 2021. The sponsors – Hannells Estate Agents, Flint Bishop Solicitors, HUUB, Mortgage Advice Bureau, Stratstone BMW and MINI Derby and WDS – also supported this year’s innovative event. The new recordings by Sinfonia Viva were supported by Rolls-Royce.

The Hannells Darley Park Concert plays such a key part in the city’s cultural calendar, so I am thrilled that viewers and listeners took this year’s very different event to their hearts. I’m looking forward to next year, when the concert returns to Darley Park.

To book your tickets early for The Hannells Darley Park Concert on Sunday 29th August 2022, book online at www.derbylive.co.uk or call the Sales and Information Centre on 01332 255800.