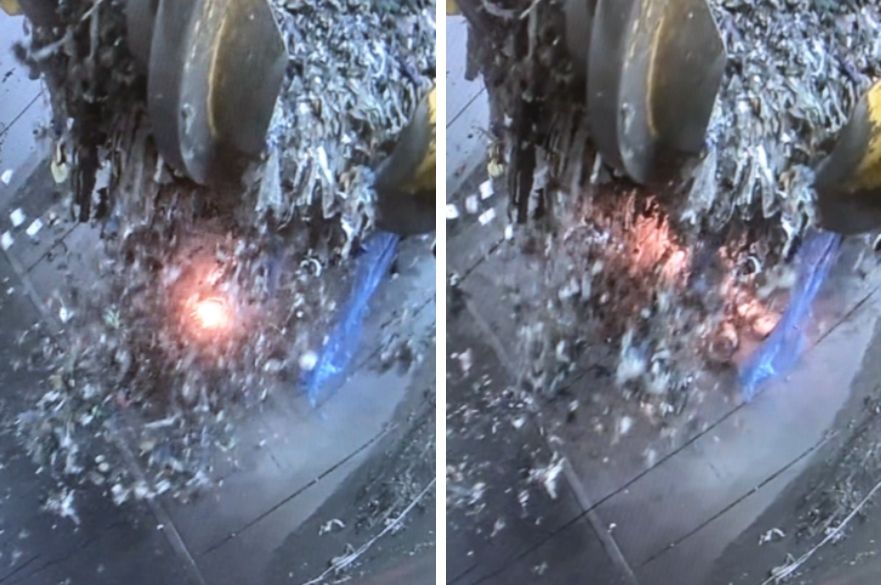 Derby City Council, along with partners in the waste disposal industry are calling on residents in Derby to stop putting batteries, electronics and gas cannisters in their wheelie bins.

Pictures sent to the Council showed the moment almost 60 tonnes of waste were set alight after a small, household battery combusted when it was dragged along a metal surface, causing a spark.

Thankfully, in this case, the fire was quickly spotted and extinguished but incidents such as this are becoming terrifyingly common. A fire at a waste plant in Telford in April this year caused schools and a motorway to be shut for a number of days due to the toxic smoke caused by the fire. Local residents had to keep doors and windows shut because of the impact on the local air quality.

These fires can also start in wheelie bins or refuse collection vehicles causing a significant and dangerous risk to refuse crews and local residents.

However, there are several very simple steps that Derby residents can take to stop anything like this happening. The simplest of which is to not put items listed below in wheelie bins.

“Whilst throwing these items in the bin might seem harmless enough, the reality is that they can be very dangerous and risk serious harm to our teams, our vehicles and our partners too. So, please follow our advice and keep batteries, electronics and gas cannisters out of bins.

We’re all becoming increasingly aware of our impact on the environment and the climate and there are so many small things we can all do to make a positive change. Simple things like recycling batteries and electronics means that valuable resources can be recycled and reused helping all of us to be more sustainable.”

Here’s why some items are such a problem in bins what you should do instead:

Batteries – They might appear dead but they still contain dangerous chemicals and more than enough energy to cause a fire. Take these back to the shop you purchased them from. Any shop that sells more than 250 batteries a year must offer a recycling service in store. If you don’t want to go to the shop for just a couple of double A’s, collect and store them in a bag or tub. Better still, invest in rechargeable batteries instead of disposables, even these can be recycled at the end of their life.

Electronics – Electronic items like phones, tablets and smart watches all contain batteries and whether they’ve broken or you’re just not using them anymore, a wheelie bin is not the place for these items. Lithium based batteries that are often used in these items can be extremely dangerous. There have been several stories published about lithium batteries causing serious injury when they’ve over heated in someone’s pocket. Now imagine what that could do in the back of a refuse vehicle or a waste treatment centre! So, the best thing you can do is take broken electronics in store for recycling. Most shops that sell these items allow you to bring them in for recycling, even if you didn’t purchase them there. Alternatively, you could sell or donate your unloved electronics. As a last resort, you can take them along to Raynesway HWRC.

Small electrical appliances – In many cases, items like kettles, toasters and hair dryers go out of fashion before they ever stop working. If that’s the case, then sell or donate them on for a functional second life. Every year, fires are caused across the UK by electrical items thrown into bins. If your item has broken, look at options to get it repaired. Sometimes it could be as simple as a new fuse in the plug which is far cheaper than buying new and far better for our planet. You can also take small household electricals to Raynesway HWRC for recycling.

Gas cannisters – Both small red helium cannisters and large gas cylinders have been found in bins across the city and it’s really not the place for them. Whilst both can easily be recycled, it takes a little more effort than popping them in the bin. Like batteries, even if they seem empty, they can still hold enough gas to cause an explosion and fire in a refuse vehicle or at a waste sorting facility. So, instead of helium filled balloons, choose something better for our environment and climate like card or paper decorations that can easily be recycled. Whilst instructions for small helium cannisters say they can be recycled in the bin, it’s still not the safest option and instead you should take them along to Raynesway HWRC along with larger gas cannisters like those used for barbeques.

To find out more about what waste goes where, visit our A-Z of recycling and rubbish.