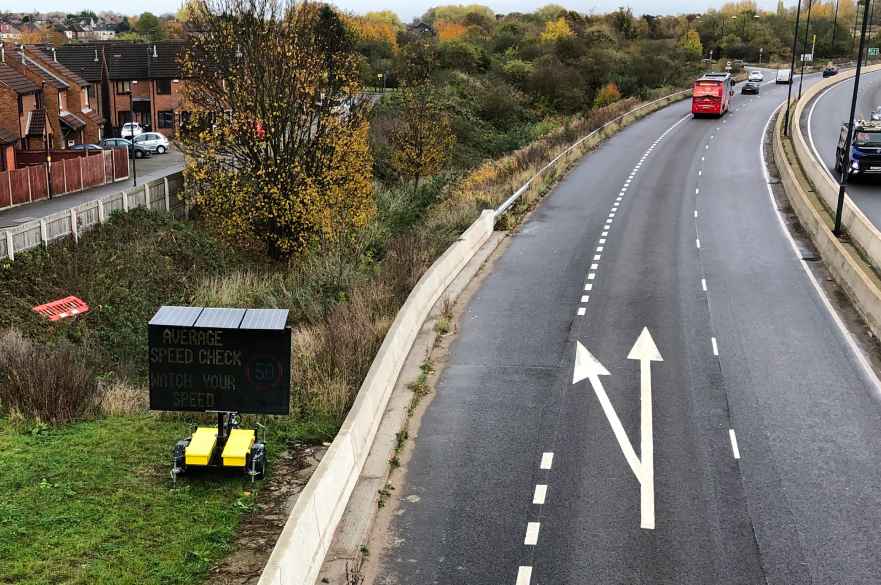 One of the 'Watch your Speed' signs on the A52

The introduction of a 50mph speed limit on the A52 has been hailed as real success with significant reduction in accidents and the added benefits of reduced noise and air pollution and improved traffic flow with fewer queues entering the city.

The average speed zone that currently lies between Pentagon Island and Spondon has been in place since February 2020.

Derby and Derbyshire Road Safety Partnership (DDRSP) has now praised the introduction of the cameras, which were introduced to help with compliance of the new speed limit, stating that around 99.5% of Derby drivers are helping to keep our roads safe by keeping their speed below 50.

The plan was originally announced citing the poor road safety record of the road, traffic flow and concerns over emissions in the area. In a five-year period prior to the new limit being introduced the Police recorded an average of 10.2 collisions per year on the A52 between the County boundary and the Pentagon island. This resulted in 162 casualties of which two were fatal, nine resulted in serious injuries and the remainder involved slight injuries.

Since the February 2020 introduction of the 50 mph limit collisions have reduced to an average of only 1.4 per year. There is also evidence that the measures have improved safety beyond the city limit on the stretch of road from the city boundary to the M1 motorway as drivers do not to speed up as much leaving the 50mph zone.

Whilst the level of compliance is exceptionally high, the goal is to help reduce speeding and the potential for incidents even further. Working with the DDRSP, driver activated signs are soon to be installed to remind drivers to watch their speed.

Despite the great success of the scheme, due to the volume of traffic on the road, around 280 drivers per week have been caught speeding through the average speed camera zone over the last 11 months. Revenue from the fines is put back into road safety measures across Derby and Derbyshire benefitting the city and county.

The DDRSP are appealing to all drivers to take note of the cameras and signs to reduce their speed on the stretch of road between Spondon and the Pentagon Island.

We’d like to thank the vast majority of drivers who are now following the new speed limit and making the A52 a much safer road.

A few drivers though are continuing to take unnecessary risks by speeding and ultimately putting themselves and others in danger. The consequences of a collision are devastating, for the victim, the driver, and their families. We ask that drivers slow down and adhere to the 50mph speed limit; by reducing your speed you can give yourself more time to react to the unexpected and reduce the risk of being involved in a collision.

The speed cameras have made a tremendous difference to journeys in and out of the city centre, especially during peak times. There is less queuing and far fewer incidents that can cause chaos on our network.

Whilst I’m very pleased with the compliance levels we still need to push those who choose to ignore the limit to do so. It is for their own benefit, in not being fined, and for the benefit of all the other road users who have a right to be safe when driving in the city.