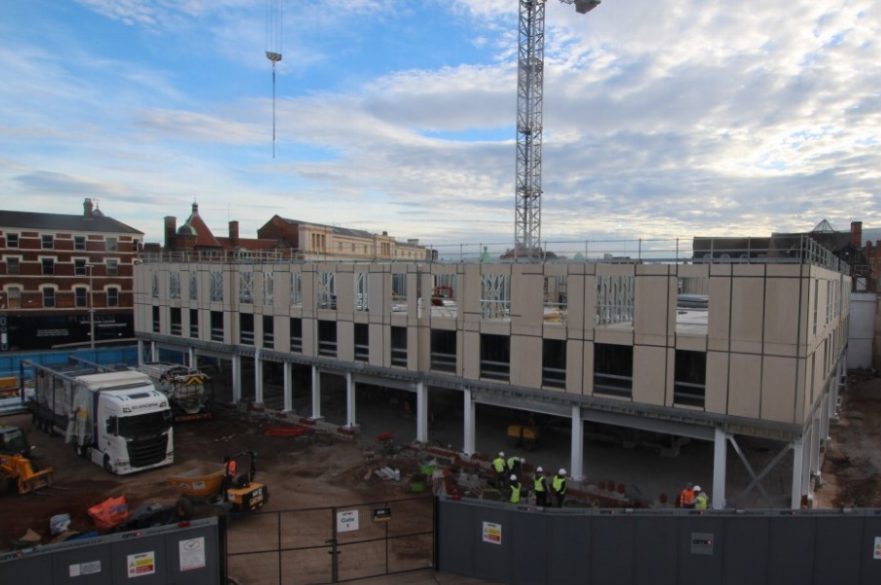 Construction work is well underway on phase one of the £200m Becketwell regeneration scheme in Derby, with the steelwork now in place for a new 11 storey apartment block being built on the site of the former Debenhams building on Victoria Street.

Construction of the 259 one and two-bedroom Build to Rent (BTR) apartments began almost four months ago and contractors GMI Construction remain on track for completion by early 2023.

The apartments form phase one of the redevelopment of the Becketwell area and will be forward funded, acquired and operated by Grainger plc, the UK’s largest listed provider of private rental homes.

The new building echoes the elegant, curved style of the original Debenhams building, which was built in 1962 and designed by Evans, Cartwright and Woollatt.

Phase one will also see the construction of a new public square at the former site of the Central United Reformed Church, work on which is set to commence in September 2022.

Demolition of the former Debenhams store and Central United Reformed Church and properties on Victoria Street was completed in May 2021, with construction work commencing later that month.

Local firm Hodgkinson Builders have recently been appointed to construct the brickwork for the landmark project.

A time lapse camera has been set up by contractors GMI Construction to enable people to view progress on site.

Planning permission was granted last month to bring forward phase two of the scheme, which will feature a new 3,500-capacity performance venue on the site of Laurie House offices and the former Pink Coconut nightclub, which will be operated by ASM Global, the world’s leading provider of entertainment experiences.

Future planned phases of the scheme include a range of other complementary uses of the site including new grade A offices and commercial space, a hotel, and a multi-storey car park.

It is anticipated that more than 2,000 jobs will be created by the regeneration of the area. It is also hoped the substantial levels of investment proposed at Becketwell will provide confidence for further new investment in surrounding areas of the city centre.

Grainger is a market leader in the UK build to rent and private rented sector. This is their first investment in Derby and forms part of their national build-to-rent and PRS investment strategy.

Commenting on the progress of phase one of the scheme, Dan Murray, construction director at St James Securities, said:

We’re delighted to see the progress of construction work on this landmark regeneration scheme, which will breathe new life into an area which has been challenged for many years and give hundreds of people the chance to live in high-quality homes in the city centre.

Alongside the apartments and public square that will make up phase one, there will be wider development, including our new performance venue, which will be developed by St James Securities and owned by Derby City Council, a hotel, new public space, and offices.

We are proud to be delivering a scheme that will revitalise this long-neglected area of the city and help to improve the overall vibrancy and attraction of the city centre.

The Becketwell development is one of the cornerstones of our economic recovery plan as we seek to reinvigorate the city centre. Watching the progress being made on the site is really very exciting, not only in terms of seeing this project being delivered but for the much needed improvement and regeneration of what was a neglected area of the city.

We’re delighted with the teams we have in place to deliver the project with St James Securities. We believe the project is in safe hands with GMI Construction, Grainger plc, ASM Global and local contractor Hodgkinson Builders.

Funding for the Becketwell project includes £8 million in Local Growth Fund investment from the D2N2 Local Enterprise Partnership, the private sector-led partnership of business, local authorities, skills and training providers and community and voluntary services which works to promote economic and jobs growth across Derby, Derbyshire, Nottingham, and Nottinghamshire.