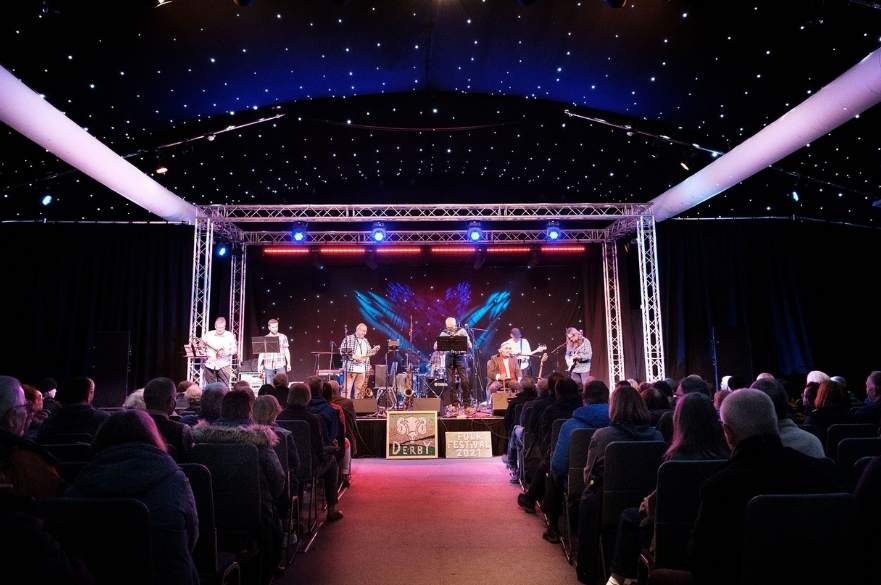 A number of performances took place in the Derby Loves You venue on Derby Market Place. Photo by Graham Whitmore.

Derby Folk Festival bounced back as a weekend of live events in style on Friday 1 October.

When COVID-19 disrupted live shows, last year’s event moved online and became the well-received Derby Folk Festival at Home.  But this year saw the long-awaited return to live concerts and did not disappoint, with visitors travelling from across the UK and Ireland.

The weekend kicked off with The Last Inklings at the Old Bell Hotel Ballroom, before India Electric Co. and Kitty Macfarlane entertained crowds at the Derby Loves You venue in Derby Market Place, renamed the Mick Peat Stage in honour of the festival’s co-director who sadly passed away in January.

A very special concert, celebrating the life of Mick Peat, saw a host of artists coming together in a heartfelt and emotional tribute. Many artists appearing through the rest of the day were joined by Jo Freya, Jim Causley, Lester Simpson, Blair Dunlop and an ensemble of The Derbyshire Volunteers – playing songs and tunes that were connected with Mick and his passion for music.

As part of the concert, Oddsocks Theatre Company were announced as the winners of the first Mick Peat Drystone Bursary The award was created by Drystone, an organization that Mick founded and was President of, to encourage and facilitate creativity in all its forms, and help re-build the arts following the Covid-19 crisis.

The festival rounded off on Sunday with a mammoth day of music back on the Mick Peat Stage, featuring Intarsia, Ranagri, Road Not Taken, Flats & Sharps, Ninebarrow, and O’Hooley & Tidow – closing, as has become tradition, with a rousing rendition of John Tams’ Rolling Home as the audience left, whilst the festival’s flyer flowers were given out.

Throughout the weekend many were able to enjoy some fantastic fringe events in the Ballroom at the Old Bell Hotel, which featured music and spoken word through Saturday and Sunday. As well as the Fun Folk Palace at the Museum of Making on the Friday evening, which included workshops and performances, there was traditional folk dancing in the city centre, and even a free ceilidh on the Market Place.

It was great to get back to a live folk festival once again, and to sell out shows how much this event was missed last year. I want to say a big well done and thank you to everyone involved in the planning and delivery of another great cultural event in Derby, and we look forward to more exciting events coming up in the City.

I could not be prouder of the success of this, the 15th Derby Folk Festival. For years we have brought the world’s best in roots and acoustic music to our city, enriching it with culture and sounds that echo through our historic market place. The legacy of our founder Mick Peat lives on in the smiles, dancing, singing and joy we saw this weekend.