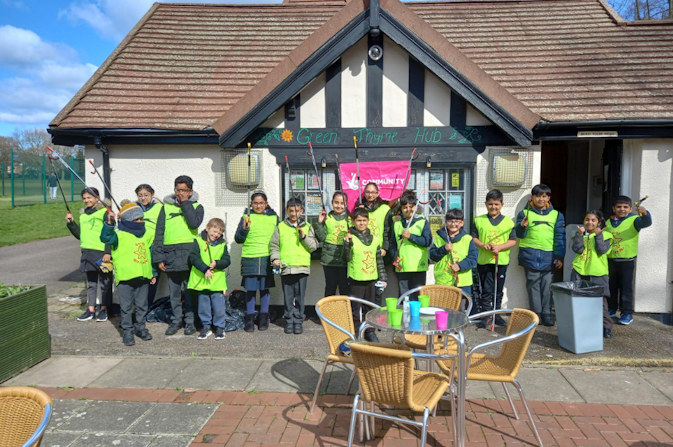 The whole community worked together during the project

This year’s Great British Spring Clean saw residents, volunteers, local businesses and Council Teams come together across Derby to do their bit for the community.

We would like to say thank you to each and every person and organisation who dedicated their time to the city throughout the campaign. Your contribution to make the city a better place is greatly appreciated.

Pennine Health collected over ten bags of rubbish during litter picks throughout the campaign. The group will also be continuing with their litter picking efforts after the Great British Spring Clean as part of their ongoing commitment to the environment.

A successful litter pick in the Shetland Close and Berwick Avenue area of Derwent resulted in six bags of litter being collected; while a deep clean in the area saw the roads swept with mechanical sweepers. We would like to thank the residents in this area who kindly parked their cars elsewhere so that the deep clean could take place. Similarly, seven bags of litter were picked from Nottingham Road and Highfield Lane up to Meadow Lane in Chaddesden. The deep clean in this area concentrated on the shopping precinct. We would like to thank the shops who once again kept the area car free while the area was swept. In addition, two litter picks happened in the area around Shaftesbury Industrial Estate and Meteor Centre McDonalds.

A deep clean took place in Cotton Lane, Elton Road and Russell Street and was also attended by the PPO team. We’d like to thank our Street Cleansing and Highways teams who worked hard in this area to litter pick and collect fly tipping along with cleaning the roads, pavements and unblocking gullies. A total of eight bags of rubbish, a table and a sofa were collected in this location, amongst other items. Close by in Sinfin Moor Park, over twenty bags of rubbish were collected by our Neighbourhoods team, Parks Officers, Move More Officers, and volunteers. We’d also like to say a special thanks to Friends of Sinfin Moor Park who turned out to support the event.

Finally, during the Spondon event over twenty bags of litter and garden waste were picked by an impressive 53 participants across two locations. We’d like to give a shout-out to the students from West Park School and the children from Springfield Primary school for getting involved. Their involvement included putting up the brilliant posters designed by the children from Springfield Primary School as well as painting street furniture and litter picking. We’d also like to thank the Derby Homes housing team and two Derby Homes apprentices for getting involved in the event as well as the Spondon VIP’s who kindly provided refreshments.

Although the Great British Spring Clean was a great success, it’s important to remember to look after the local area all year round. If you see fly tipping or littering in your local area be sure to report it to us on our website or report it to our PPO team who regularly patrol the city.