Derby sets out to unlock the potential of its river 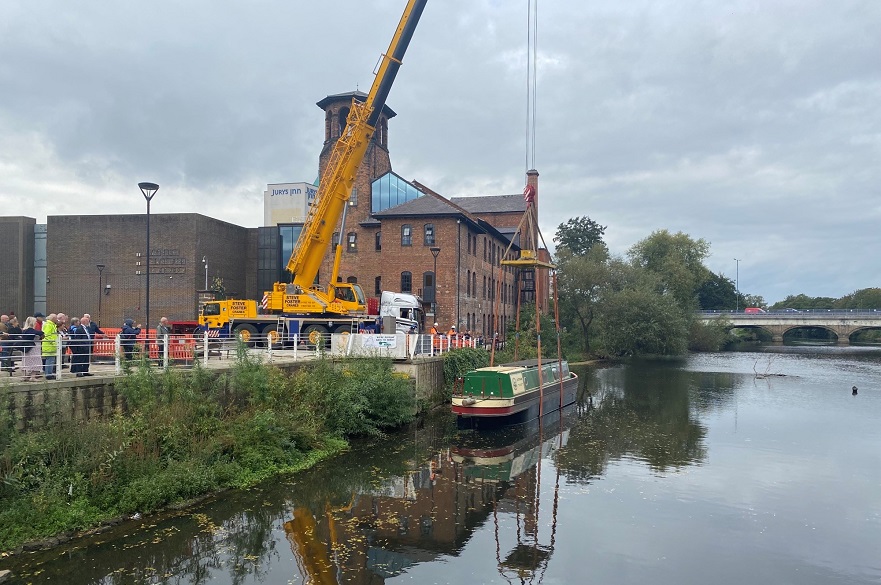 The Outram is lowered into the River Derwent from Cathedral Green

Derby City Council is setting out the first steps towards unlocking the true potential and vibrancy of its river, by paving the way for the future regeneration of the city centre.

The River Derwent through Derby city centre has not been navigable for more than 100 years, but that is now changing with the introduction of commercial boat trips on the river by Derby and Sandiacre Canal Trust (DSCT) in their riverboat, Outram.

DSCT is run by volunteers and the Council has been playing a supporting role in their venture. Since its successful launch into the river from Cathedral Green, the Outram has been undergoing trials, with the aim of commencing passenger trips during this summer.

The start of the Outram boat trips is the first step towards unlocking our river’s potential. The River Derwent is a wonderful natural amenity which could be a real selling point for Derby. In sense, the city turned its back on the river when it was no longer needed for industry, but we could let this natural asset lead regeneration, as many other cities have done.

Plans to create new greenspace around Stuart Street and Phoenix Street will also create attractive public space as part of the Our City Our River scheme to alleviate the flood risk.

In the longer term, we can look at opening up more space for potential riverside developments, for possible housing, recreation and hospitality, as well as linking to major developments downstream, such as SmartParc.

A report going to the Council’s Cabinet on Wednesday 13 April will ask members to agree to fund improvements to riverbank infrastructure which will pave the way for the Outram to begin passenger trips.

This includes a new access platform at Phoenix Green in the city centre, permanent mooring and signage to support the operation of boat trips, and also improvements in lighting, access and safety railings which will open up the riverside area and make it more accessible for pedestrians.

It is anticipated that these measures and ongoing river maintenance costs can be accommodated with existing capital and revenue budgets.