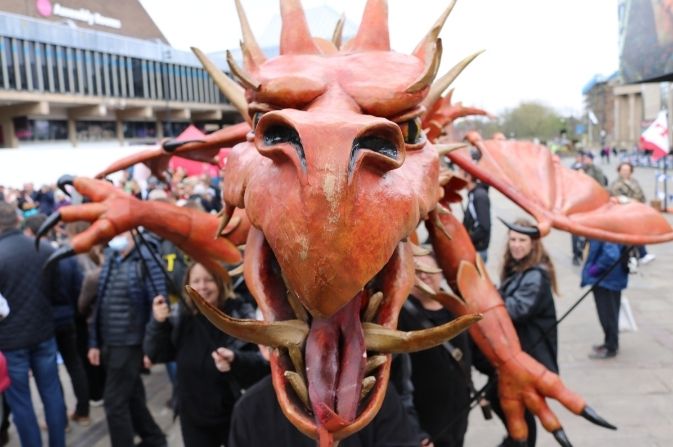 Hundreds of people turned out to celebrate St George's Day in Derby's city centre on Saturday, April 23, for the first time in person in two years since the COVID-19 outbreak began.

Derby LIVE produced the event, which was backed by the St Peter's Quarter Business Improvement District (BID) and featured a variety of acts honouring English culture and legacy in all its eccentricities.

This year's procession, led by the Mayor of Derby, Councillor Robin Wood, drew a large crowd as it passed through the city centre. Along with musicians from Folk 3D and performers from Folk Dance Remixed, St George and the Dragon paraded down past St Peter's Cross and into the Market Place.

A variety of performances infused the streets with life and activity. The Lost Boys, a popular local theatre company, produced an updated 'tongue in cheek' version of St George and the Dragon, which had the audience in the Market Place laughing and cheering.

The stage show also featured Folk Dance Remixed, with their high-energy, unique remix of Maypole, Clogging, Ceilidh, Street, House, and Breakdance with a hint of African and Bollywood to a live soundtrack of fiddle and beatboxing.

The Last Inklings, both outstanding multi-instrumentalists, were another Market Place highlight. The band's creative sound straddles genres, centred around the cello, mandolin, and vocal harmony. Later in the afternoon, Priya Sundar performed her take on the story of St George and the Dragon through the classical Indian Dance; Bharatanatyam.

Songs from England, Cornwall, Georgia, and Ukraine were performed by The Rough Truffles and Kaleidoscope Community Choir.

There were also a variety of activities on the Market Place, including arts and craft stalls, Maria Buckley Whatton's storytelling, 'Have a Go Archery,' and Dizzie O'Dare's Phileas Fogg performance.

Creature Encounter performed 'Smoked' at St Peters Cross, a fable about St George laying down his sword and dedicating his life to rearing a parentless child.