Derby submits its bid to become UK City of Culture 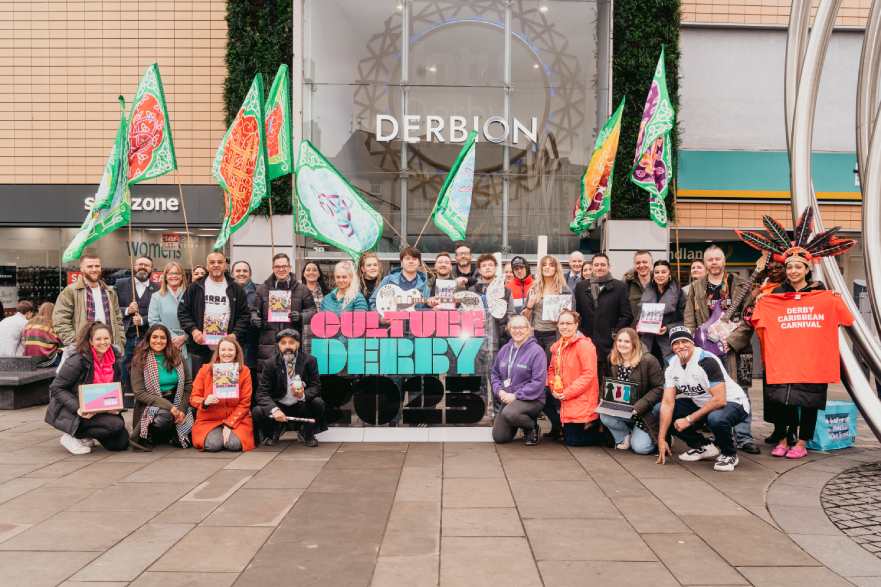 Derby's bid team and supporters at The Spot. Photo by Mark Averill.

In attendance for the photocall was the Interim Director of Derby’s City of Culture bid, Adam Buss, Councillor Ross McCristal, Derby City Council’s Cabinet Member for Leisure, Culture, Tourism and Wellbeing, representatives from the Voices Group and from the community.

As the city of Derby takes the time to celebrate the submission and the hard work from cultural partners, it’s also a time to reflect on the journey. Initially, a record 20 cities, counties and regions expressed interest in becoming UK City of Culture 2025. Derby was then lucky enough to become one of eight to reach the next stage with Armagh City, Banbridge and Craigavon; Bradford; Cornwall, County Durham; Southampton; Stirling and Wrexham.

Even before the initial bid was submitted, Derby’s culture and vibrant heritage was at the forefront of the city’s economy and recovery. From being the birthplace of the industrial revolution and industry home to Rolls-Royce, Bombardier and Toyota, to the delivery of the new 3,500 capacity Becketwell venue, Derby’s bid simply acted as a springboard for culture-led regeneration in the city.

It can be said that Derby is at its best when it works together, which is why the City of Culture bid partners were a vital part in the submission. Artcore, Baby People, Déda, Derby LIVE,

Derby Jazz, Museum and Art Gallery, Museum of Making at Derby Silk Mill, Derby Theatre, QUAD, Sinfonia Viva and EMCCAN have all made invaluable contributions to the bid both financially and culturally.

However, it’s not just local organisations that have been supporting the bid. Ambassadors from the arts, industry, sport and education, based in the city and wider region, have also pledged their support for the city. These include award-winning actress Molly Windsor; musician, writer, actor and director Dr John Tams; Baby J from Baby People; Derby County Football player Max Bird; Nisha Nath, chair of Surtal Arts; Lord Lieutenant of Derbyshire Elizabeth Fothergill; Dean Jackson, founder and CEO of HUUB, and Tracey Harrison from the Safe and Sound charity. The most recent bid supporter is Derby-born, critically acclaimed actor Jack O'Connell.

Similarly, the Culture Derby 2025 sign has been touring Derby showcasing the teams supporting the bid, as well as the key locations contributing to the city’s culture. These include Derby Arena, Derbion, Kedleston Hall and many more. These images, along with other Culture Derby 2025 campaigns can be seen on social media by searching the hashtags #CultureDerby2025 and #CityofCulture2025.

There have been lots of contributions to the bid including £33,000 of pledges from the recent business event at The Museum of Making at Derby Silk Mill. Marketing Derby also pledged £20,000 of support earlier this month, giving the bid a major boost. A further £60,000 was pledged after local firms Cosy Direct, Smith Partnership and Lubrizol teamed up to support the bid. The trio of companies have each pledged £5,000 over a four-year period.

Working together with our cultural partners during the City of Culture campaign has been an incredible experience. We’d like to thank everyone who has pledged funds, used the hashtag or otherwise voiced their support for the final bid. None of what we have achieved so far would be possible without your involvement. As we now await the shortlist decision, we will continue to work together as a city to develop the cultural input into our social and economic recovery, as demonstrated in Coventry’s previous successful bid.

It’s great to see the city of Derby work together in the lead up to the final bid submission and it’s clear to see just how much the vibrant culture means to the local community. We should be proud of our contributions to the city so far and acknowledge the potential unlocked, should we be successfully chosen as the UK City of Culture.

Looking ahead from the final bid submission, the Government’s Department for Digital, Culture, Media & Sport (DCMS) will choose four finalists who will make up the short list. Each of the four finalists will then be visited by judges. The final winner is expected to be announced in late Spring 2022, who will take the title of the UK City of Culture 2025. The current holder of the UK City of Culture 2021 is Coventry who was declared the winner in 2017.