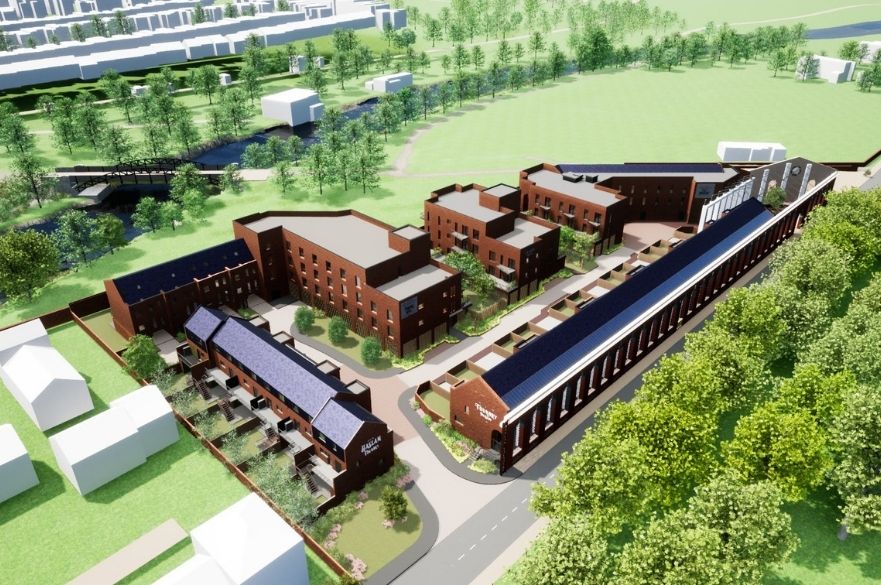 The new development – situated on the site of the former Aida factory – will be known as Haslam’s Foundry. Plans see 74 new affordable council homes built, with a mix of one and two-bedroom apartments in low-rise blocks, and  two-, three- and four- bedroom townhouses. The homes will be managed by Derby Homes and let to local people in need of housing.

The new homes will boast excellent green credentials, with heat pumps and solar panels fitted, as well as being built above ground level due to the risk of higher flood levels in the future. The proposals also retain and conserve the Victorian façade of the foundry, with its tall arched windows, while removing the more modern industrial buildings.

The 21 townhouses will have driveway parking, while there will be undercroft parking for 26 cars beneath the 53 apartments. This figure was based on car ownership at similar schemes. The new development will also have sufficient cycle storage with space for every resident. The City Road car park will continue to operate as a public car park.

Alongside the 74 homes, three commercial units have been proposed to front onto the City Road car park. These will be very visible to people using the busy footpath to the river and will help to integrate the new development with the existing community.

Derby City Council originally acquired the site in 2018 to enable the construction of a new flood wall as part of the ‘Our City Our River’ (OCOR) scheme. This was completed and proved its worth straight away in the flood event of November 2019. In 2021, £825,000 of funding was received from the Brownfield Land Release Fund towards the cost of cleaning up the site.

The site includes what remains of Sir Alfred Seale Haslam’s Union Foundry, including the main foundry building which dates to 1876. Haslam, who served as Mayor of Derby, was responsible for developing much of the surrounding terraced housing for his workforce, making the site of particular importance to the Little Chester Conservation Area.

The new development is intended to regenerate the area whilst recognising its important heritage, both within the Little Chester Conservation Area and the buffer zone for the Derwent Valley Mills World Heritage Site.

I’m delighted that we can now invite the public to have their say on the proposals for the redevelopment of Haslam’s Foundry. This is a great opportunity to provide an efficient and sustainable redevelopment whilst maintaining the heritage of the area.

We must do our best to make the right use of this riverside location, so I would encourage residents to look over the proposals and the accompanying images and have their say before the end of the consultation.

Following consultation, a full planning application will be submitted in the Spring.

These plans offer a really exciting prospect for regenerating the former factory site as part of the ‘Our City Our River’ (OCOR) project. It is great to see that the plans will look to keep the proud heritage of the site, whilst building sustainable housing to meet demand with strong green credentials.

The re-development has been made possible through the strong work to-date to address the potential risk of flooding to the area. It is important that the redevelopment of the site, which has been unused for nearly 20 years, is done right and I am very pleased that residents will get to have their say.

You can see the proposals and have your say on the Let’s Talk Derby platform until Sunday 13 March. The project team will also be available at two drop-in sessions to discuss the plans. These will be on Thursday 10 February (3pm – 8pm) and Friday 11 February (10am – 2pm), both at St Paul’s Church Hall on Seale Street.