You won’t get cold feet over this year's panto star! 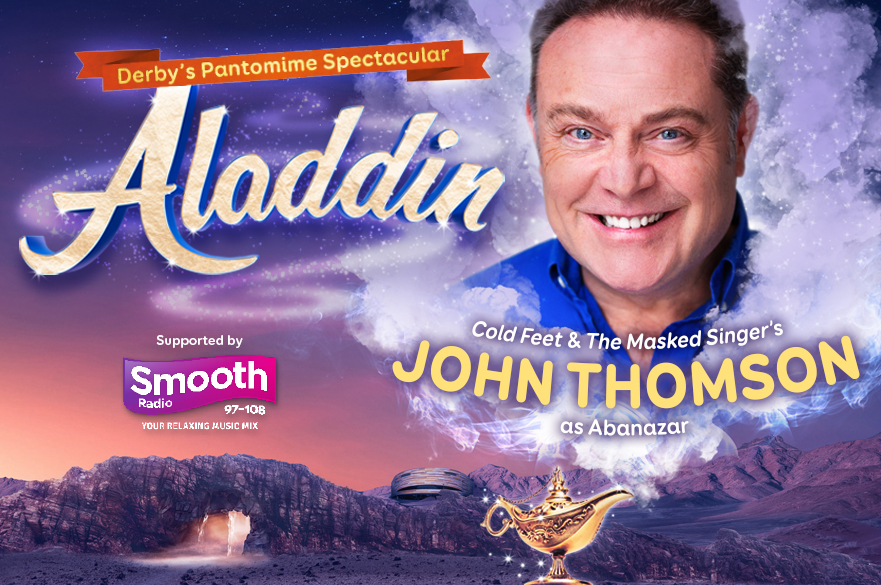 The iconic Cold Feet star John Thomson is to star in this year’s pantomime in Derby alongside award-winning Best Dame Morgan Brind.

Best known for playing Pete Gifford in the hit ITV comedy Cold Feet, John will be taking to the stage at Derby Arena as antagonist Abanazar in Aladdin from Fri 9 Dec 2022 – Sat 31 Dec.

“We’re elated to announce that John will be joining our cast of Aladdin this Christmas. John has an impressive showbiz CV from his recent appearance as ‘Bush Baby' in series 2 of The Masked Singer and his antics in 90's comedy show The Fast Show along with voicing a number of characters in Spitting Image. John recently finished shooting a guest lead in series two of ITV'S Professor T opposite Ben Miller and we can’t wait to see him in action on the Derby Arena stage soon.”

“I’m very excited to bring my own brand of Panto magic, playing the baddie Abanazar in Aladdin this Christmas - as well as getting to know the locals, the city and perfecting my Derby accent!’

Comedian, writer, narrator and actor John Thompson is a former resident of the cobbles when he starred as Jesse Chadwick in Coronation Street between 2008 and 2010. He is also the voice behind fan favourites Obsessive Compulsive Cleaners and Police Interceptors.

As a long-time collaborator with Steve Coogan, John has appeared in Knowing Me, Knowing you, 24 Hour Party People, Northern Soul and Alan Partridge’s Scissored Isle amongst others.

Not only does John have an impressive career in TV, but he has also featured in films such as Sky’s Last Train to Christmas and The Brother’s Grimsby alongside Sacha Baron Cohen and Rebel Wilson. He has also starred in Warner Brothers’ Inkheart with Brendan Fraser and Sienna Guillory as well as Amazon Prime’s Dementamania with Geoff Bell.

Tickets for Aladdin are on sale now with prices ranging from £18 - £30 depending on the performance. Concessions are available along with BSL, relaxed, audio described and captioned performances. Tickets can be purchased on the Derby LIVE website,at the Sales and Information Centre Riverside Chambers, Full Street, Derby, DE1 3AF, or by calling 01332 255 800.