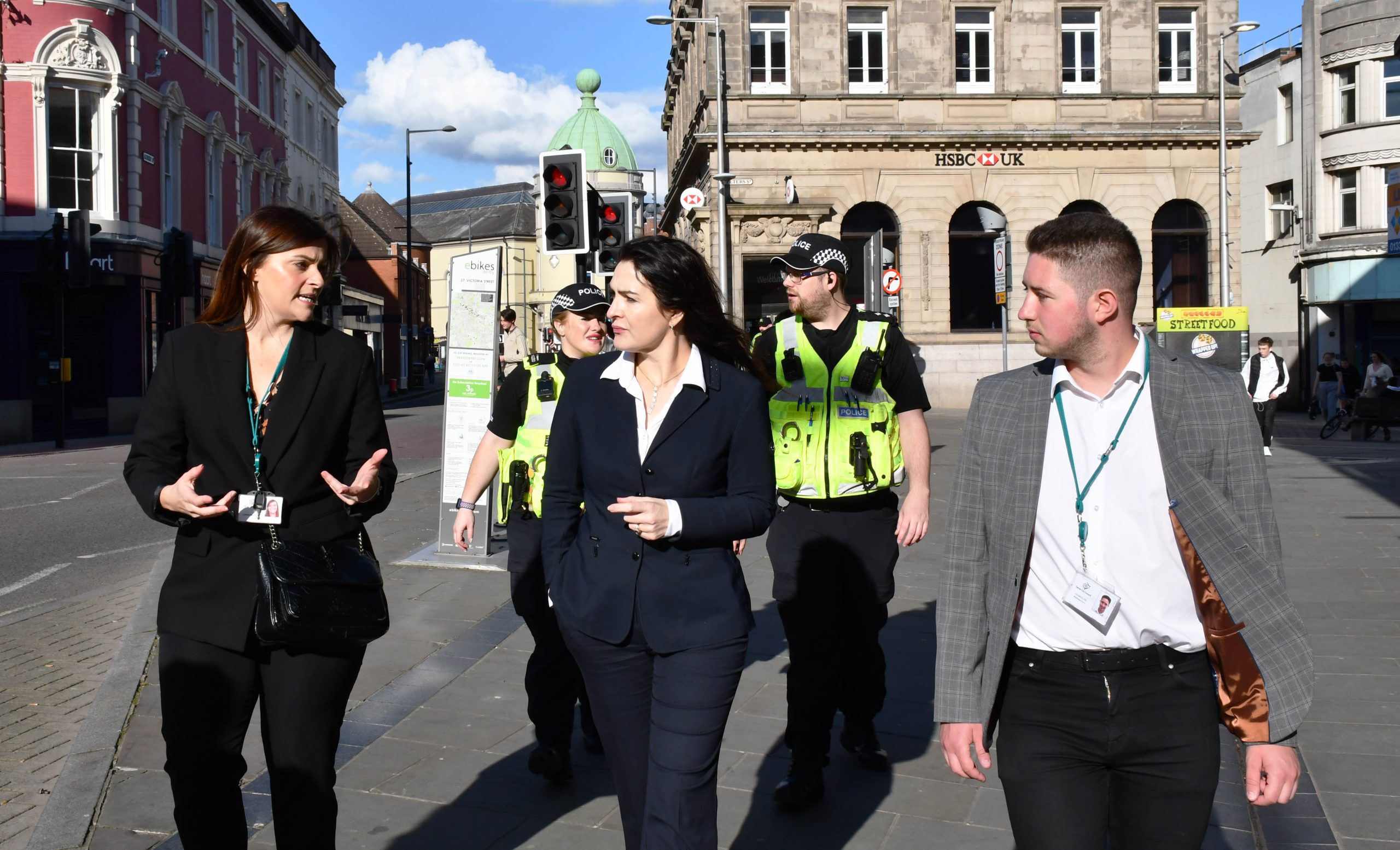 Derbyshire Police and Crime Commissioner Angelique Foster has visited the site of new CCTV and lighting improvements in Derby City following the conclusion of a major safety project.

Police and Crime Commissioner Angelique Foster met with Cllr Matthew Eyre, Lead Cabinet Member for Community Safety, Lindsey Maidstone, Domestic Abuse and Sexual Violence Co-Ordinator and Charles Edwards Head of Service at the City Council to see how funding from the Home Office’s Safer Streets 3 Fund has been invested to improve the safety of women and girls across the city.

Following the endorsement from Police and Crime Commissioner Angelique Foster, Derby City Council was awarded £550,000, the maximum grant available, in the third round of the national funding scheme aimed at keeping women and girls safe at home, online and in public spaces.

The cash has been invested in a series of physical improvements including new CCTV cameras and additional street lighting to reduce vulnerability and the risk of violence, especially among women and girls.

These simple changes to our streets will help women feel much safer when walking alone and deter potential offenders from causing harm. Any crimes which do occur will be captured by high-quality footage, increasing the chance of the perpetrators being caught and securing vital evidence for prosecution.

Prioritising the safety of women and girls is a key priority and as Derbyshire’s Police and Crime Commissioner, I will continue to scrutinise the work of the force and its officers to see how it is meeting its responsibilities to deliver justice for victims of violence and protect future victims.

This Home Office funding has given our streets a significant safety boost and I strongly support the investment in bystander training to help change the attitudes that underlie violence against women and girls.

I am impressed by the continued hard work and commitment from the Derby City team. While this project is complete, we will continue to work with our partners to maximise the safety of all residents, especially women and girls, and monitor the impact of our new resources to inform further work in the future and secure Derby and Derbyshire the funding it deserves to keep on making progress.”

The new measures include:

We want Derby to be a city free from gender-based violence, abuse, harassment and exploitation, and the Home Office Safer Streets Funding, including the £550,000 Derby City received through Safer Streets Three, has given us the opportunity to really make a difference to reduce the vulnerability and risk of violence towards women and girls.

The funding allowed us to take innovative steps to increase the safety of women, girls, and all visitors to and residents of our city, through public realm improvements but also courses on being an Active Bystander, Getting Home Safely and how we can all become allies, amongst many other projects.

Not only does effective lighting and CCTV provide confidence for local people, it also plays a key role in preventing, detecting and solving crimes, and our wide range of community safety initiatives received incredibly positive feedback from attendees.”