Derby sets its sights on UK City of Culture 2029 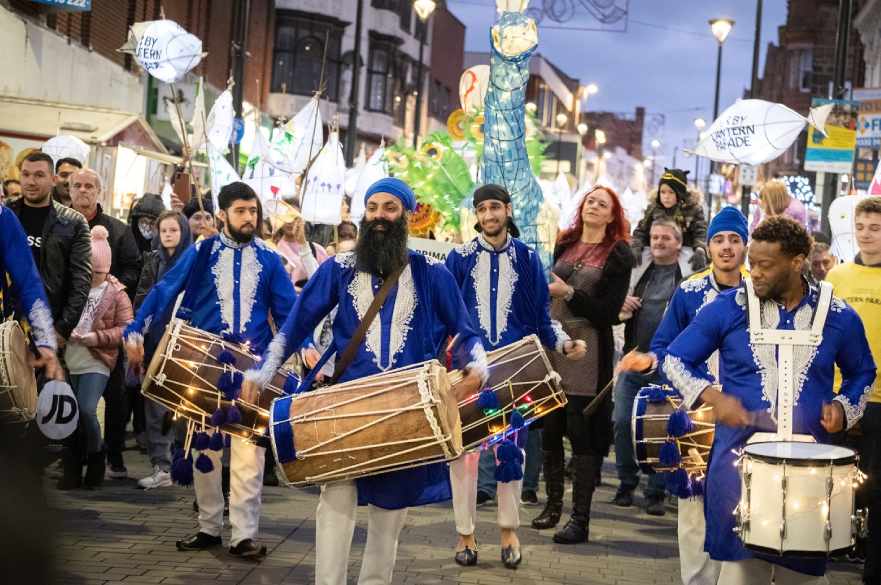 Fusion drummers leading the Season of Light lantern parade at the Christmas Lights Switch On 2021. Image by Surtal Arts

Derby may be out of the running to become UK City of Culture 2025, but it is definitely not disheartened.

As the Government announces its shortlist of four, the team behind Derby’s bid is now looking to the future, using all the support it has won over the past few months to set its sights on becoming UK City of Culture 2029.

The UK City of Culture competition is a brilliant opportunity for places to increase people’s interest in the arts while benefiting their local economies. I offer huge congratulations to Derby for making it this far in the process and I hope that being part of the 2025 longlist will leave a rich cultural legacy for the local community.

What began as an expression of interest put together in just a few weeks quickly gathered momentum, uniting the arts and business sector, local authorities, environmental organisations, politicians and even Derby’s twin city of Toyota in Japan to get behind the ambition.

Even before the initial bid was submitted, Derby’s culture and vibrant heritage was at the forefront of the city’s economy and recovery. From being the birthplace of the industrial revolution and home to Rolls-Royce, Alstom and Toyota, to the delivery of the new 3,500 capacity Becketwell venue, Derby’s bid was seen as a springboard for culture-led regeneration in the city.

Using culture as the starting point to improve citizens’ wellbeing, opportunities and social mobility was also vital to the bid, and that ambition is set to continue.

This process has never been just about winning a competition. It’s been about recognising the role of culture in making our city a vibrant place to live and work.

Congratulations to those cities moving forward, and to those like us who did not make the final four. Everyone has worked so hard and the diverse group of places represented is testament to the competition and its potential to transform not only those places but the whole of the UK.

For Derby, it’s now time to reflect on how far we’ve come in such a short space of time, having won the support of the city’s sectors. Industry, the arts, education, sport, politics and the environment – all of Team Derby - will continue to be behind us as we move forward.

There is more understanding now of how important culture is to the city, not only in terms of regenerating buildings and public space, but also to the wellbeing and prospects of our citizens, and this work will continue. Being UK City of Culture 2025 would have opened up opportunities to make this happen more quickly, but our ambition remains as we set our sights on winning the status for 2029.

There is no reason for us to be disappointed today. A huge amount of hard work went into Derby’s bid and it was a prime example of the city working together in partnership. We’ve built a foundation for the future and I’m very proud of Derby for getting this far in such a short space of time.

Putting culture at the heart of our plans for Derby’s regeneration was a priority even before we submitted our expression of interest. It’s about improving our city, making it a vibrant place to live and work, and setting the scene to make culture shine through. This will continue to remain our vision as we bid to become UK City of Culture 2029 and beyond.

Ambassadors from the arts, industry, sport and education, based in the city and wider region, have pledged their support for the city. These include Derby-born, critically acclaimed actor Jack O’Connell, award-winning actress Molly Windsor; musician, writer, actor and director Dr John Tams; Baby J from Baby People; Nisha Nath, chair of Surtal Arts; and Tracey Harrison from the Safe and Sound charity.

Initially, a record 20 cities, counties and regions expressed interest in becoming UK City of Culture 2025. At its first bidding attempt Derby was one of eight to reach the next stage with Armagh City, Banbridge and Craigavon; Bradford; Cornwall, County Durham; Southampton; Stirling and Wrexham. County Durham, Wrexham County Borough, Bradford and Southampton have made it to the final shortlist.