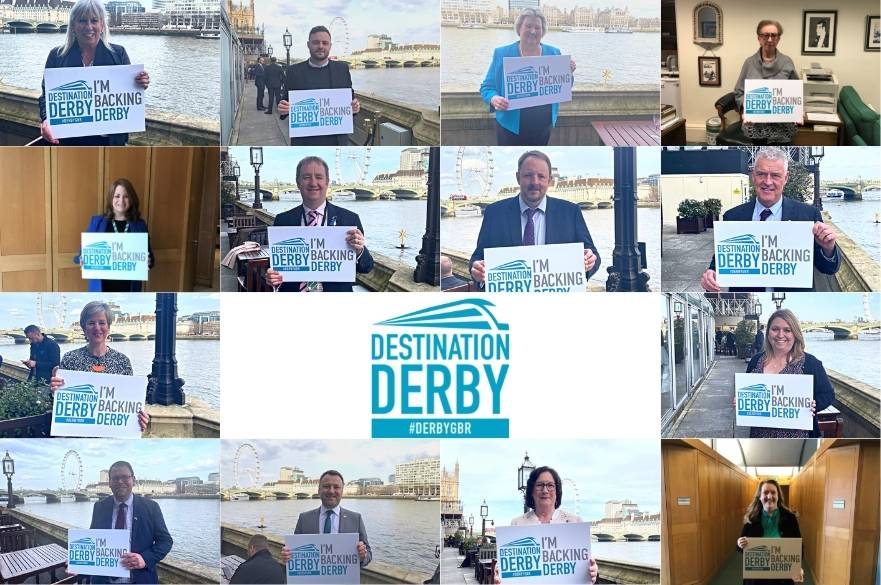 Derby City Council has submitted their expression of interest for the city to become the home of Great British Railways (GBR).

The bid outlines why Derby would be a good fit for the new headquarters, as well as promoting its 180 years of rail history. Being based in the heart of the UK rail network, means that over 11,000 workers are employed in Europe’s largest and most diverse rail cluster. Centred around Derby it covers every aspect of railway building, maintenance and operation.

Uniquely, Derby is home to major players in the automotive and aviation industry including Rolls-Royce and Toyota, making it uniquely placed for GBR to benefit from cross-sector collaboration and a highly skilled workforce.

Rail is in the blood of many generations of people in Derby, who are naturally proud of our rich and deep-rooted rail heritage and that’s why I’m delighted to announce that we have submitted an expression of interest to become the home of GBR.

As a city we’re looking towards the future of the sector and this is where Derby can excel. We are the centre for rail excellence and innovation, with a strong supply chain to support a large, diverse rail cluster.

We believe we have a very strong and compelling case for Derby to be the home for the first national headquarters of Great British Railways, which we’ve outlined in our expression of interest to Government.

I would like to thank key partners from across the region for supporting us with our submission and for helping back our bid! The East Midlands makes us the best-placed region to meet GBR’s requirements and levelling up needs.

Government announced their commitment to move 22,000 civil service jobs out of London by the end of the decade. The relocations will be an opportunity to improve the capacity of the civil service, by helping to attract and retain talented staff across the whole of the UK and for decision-making to better reflect the whole population.

The bid has the backing of all three counties, Derbyshire, Nottinghamshire and Leicestershire, as well as support from 22 East Midlands based MP's.

I’m very proud to be backing Derby’s bid to be the new HQ for Great British Railways and I believe that our city has outstanding credentials for the role. With Derby’s rich heritage as the longstanding home to Midland Rail and prime location at the heart of the rail network, it is well placed to serve as the centre for the new organisation.

What truly makes our bid unique is the vital importance that our tremendously skilled workforce continues to play in underpinning our national industry. More than two thirds of the UK’s rolling stock is supported from the Litchurch Lane site in Derby alone, and Derby is home to the largest cluster of rail companies anywhere in the world.

Together with the significant work going on locally to explore the potential of AI and rail decarbonisation, Derby possesses an exceptional combination of representing the past, present and future of the rail network and our national rail industry.

I think the Government would be making a very good decision by bringing Great British Railways to Derby.

Derby has a fantastic rail heritage, is the centre of the UK’s rail network, and is the home of rail sector innovation for the future. There is no better place for public-private collaboration, with excellent connectivity around the country, and building on over 180 years of railway history.

The history of the rail industry is inextricably interwoven with the history of Derby but that is not why Derby would be the best possible place for the headquarters of GBR. It is because the Derby of today and tomorrow is a transport hub steeped in contributing to the transport of the future, the home of the largest network of rail companies probably in the world-building operating and maintaining the transport of the future is part of Derby's raison d'être. That is what makes it the right place for the new GBR to be headquartered.

The East Midlands has the greatest concentration of rail engineering businesses in the world, and Derby is the perfect choice to be the home of Great British Railways.

Derby is the obvious place to be the home of GBR, with its historic rail connections and proud heritage of manufacturing and engineering, including Alstom building trains that drive both the UK and also much of the rest of the world. I back this bid, my Council does in Notts too. The whole region is backing Derby.

With four new HS2 stations, including Derby, and billions of new rail investment coming to our region, the new hub of Great British Railways must be in the East Mids. It fits perfectly with our plans to boost investment and infrastructure by working together across the region, and with new powers related to rail set to be handed down to our area from Government. GBR should come to Derby.

I am proud to support Derby’s bid to become the home of Great British Rail. Given our amazing rail and industrial history, central location and reputation for manufacturing excellence, we are the natural home for Britain’s rail industry. Bringing Great British Rail to the East Midlands will be a huge boost to our levelling up agenda locallyand sit alongside our amazing new Freeport.

You can read more about our launch last week on our Newsroom.

Successful applicants with be notified of shortlisting in May.

Visit the Destination Derby website and sign up to the campaign to find out more about the bid, the timeline and why Derby is a good fit for GBR.

Find out more about the National HQ Competition for GBR.