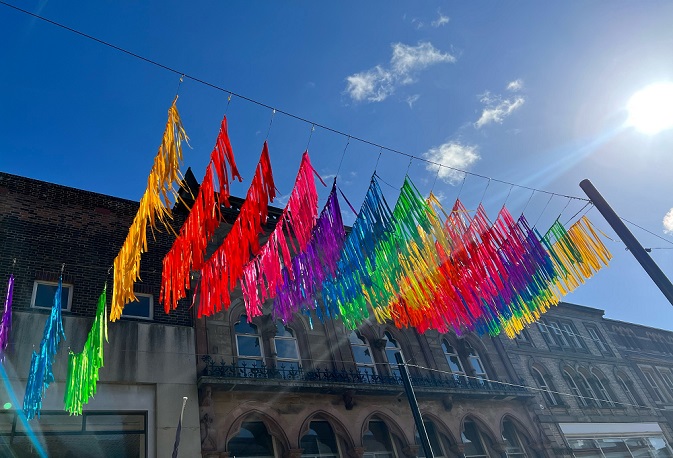 A canopy of colourful ribbons brightens up Iron Gate

Derby’s streets are starting to look more vibrant as businesses start to complete creative projects aimed at making the city centre more attractive for all visitors.

Ten local businesses were selected to receive a total of £250,000 from Derby City Council’s Additional Restrictions Grant (ARG) Vibrancy Fund - a pot of cash set aside to help local businesses get back on their feet post-Covid.

The money will fund a wide range of projects, including street art, sculptures and lighting schemes.

Timed to coincide with World Poetry Day on 21 March, 12 shops across the Cathedral Quarter and St Peters Quarter were decorated with inspiring messages composed by poet James McInerney.  James is the driving force behind The Poetry Project, an initiative that aims to promote well-being with positive and motivational messages in public areas.

All poems and artwork will remain in place until the summer.

Meanwhile in Iron Gate, a canopy of colourful ribbons was recently installed in a bid to encourage and inspire more shoppers.

It is the brainchild of local artist, Amy Vallance, who said:

This canopy was inspired by the joy I feel by being born and raised in Derby,

By using a rainbow, it not only displays pride in our city and the diversity we have, but using a rainbow is also a metaphor for unity and new beginnings.

Working on the City of Culture bid has brought passion back to the city and this shows that we can start with a new beginning by bringing “Joy” back to our Derby.

Derby’s arts centre and charity based in Derby Market Place, QUAD, was one of the first organisations to turn their creative idea into a reality.

They are also buying smaller projectors and lenses to use for displays, such as lighting historic shop fronts.

Established Derby sculptor April Young, is putting the finishing touches to her sculpture which will extend from her gallery at 18 Sadler Gate into a canopy overhead featuring lots of butterflies. The artwork, which is called ‘Nowhere to go but Everywhere’, is intended to be a celebration of the social history of Derby, featuring Sadler Gate in its heyday.

Music and arts development organisation Baby People was awarded £20,000 to work with experienced artists to produce street art in some of Derby’s landmark locations. Based in Derby, Baby People is the UK’s first Hip Hop school, and uses the black music and the arts to engage young people who have disconnected from education and employment.

The ARG funding was devised to help improve our city and make it a vibrant place to live and work. These projects demonstrate the depth of creativity and rich culture we have in Derby and it’s exciting to see them come to life.

We’re also delighted to support our local creative communities, and give young artists an opportunity to showcase their work to thousands of people.