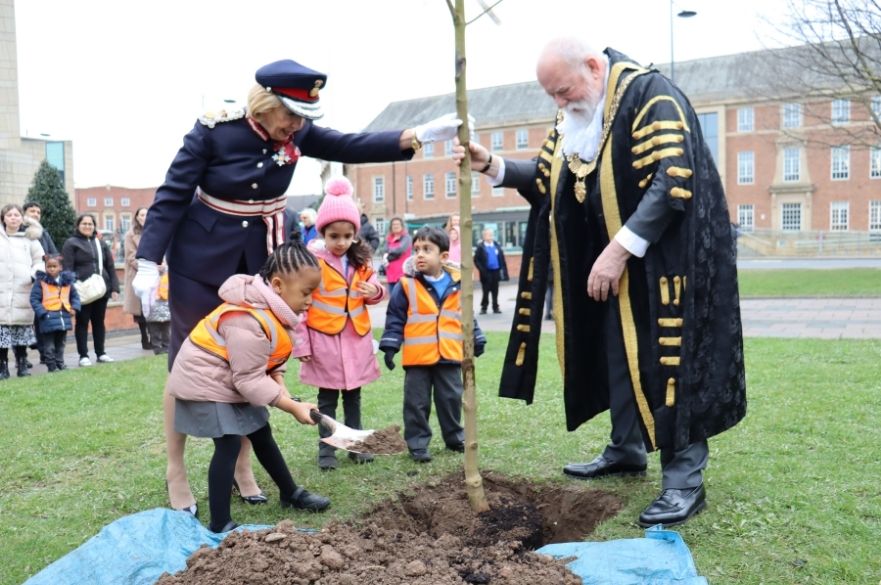 The official launch of the Queen’s Green Canopy project was marked today (Friday 11 March), with the planting of a new civic tree in Sir Peter Hilton Gardens, opposite the Council House. Derby has also been given ‘Champion City’ status as part of the project.

Derby was awarded ‘Champion City’ status based on the strength of the application put forward by Derby City Council to the Queen’s Green Canopy team.

The new tree, an Acer (platanoides 'Drummondii') has been chosen as it has variegated leaves which will add colour and diversity with its cream and green foliage.

The tree was jointly planted by Councillor Robin Wood, Mayor of Derby, the Lord Lieutenant Elizabeth Fothergill and High Sheriff of Derbyshire, Louise Potter. It is one of thousands of other trees due to be planted as part of the Queen’s Green Canopy in Derby.

The initiative has been launched to mark her Majesty’s Platinum Jubilee in 2022 and is designed to create a lasting legacy for younger generations.

The School Celebration Tree project is designed to help communicate the significance of giving young people access to nature and trigger a wider engagement with trees across the curriculum, and each chosen school will be incorporating diverse aspects of the event into their curriculum.

We’re delighted that Derby has been given Champion City status as part of Her Majesty’s Platinum Jubilee celebrations. As a city we’ll be taking part by not only planting our Civic tree but by adding almost 10,000 new trees across the city for the people of Derby to enjoy.

The Queen’s Green Canopy is a fantastic idea and we will continue to support with planting all the way through 2022.

It is a great honour to receive Champion City status here in Derby; a fitting way to commemorate Her Majesty’s Platinum Jubilee.

Derby is proud of its green spaces, and I’m pleased that as part of the Queen’s Green Canopy we’re planting over 9,000 trees across the city.

The event today was a delight – my thanks to the children from Castleward Spencer and Wyndham Spencer Academies for their stupendous composition.

As the home of the Country’s first public park, Derby Arboretum, it’s only right that Derby is given Champion Status as part of this prestigious legacy.

It was an honour to have been invited to join the Mayor of Derby and other leaders, as well as students from Castleward Spencer Academy for the planting of trees in recognition of Her Majesty, The Queen’s Platinum Jubilee.

I’d encourage as many schools, individuals and organisations as possible within Derbyshire to consider planting a tree as part of the Queen’s Green Canopy and create a lasting legacy to Her Majesty within our county.

With a focus on planting sustainably, the QGC will encourage tree planting to create a legacy in honour of The Queen’s leadership of the Nation, which will benefit future generations.

As well as inviting the planting of new trees, The Queen’s Green Canopy will dedicate a network of 70 Ancient Woodlands across the United Kingdom and identify 70 Ancient Trees to celebrate Her Majesty’s 70 years of service.

By inviting everyone to plant considerable numbers of new trees throughout the country, the QGC seeks to highlight the significant value of trees and woodlands as nature’s simple but highly effective way to clean the air we breathe, slow the impact of climate change, create important wildlife habitats and improve our general health and wellbeing.

Everyone from individuals, charitable organisations, schools and estates are encouraged to get involved in planting trees during the official planting season, which runs from 1 October 2021 until 31 March 2022.

For more information about how you can get involved, please email Brell Ewart, Deputy Lieutenant who is co-ordinating the project within Derbyshire.

Further information about the QGC is available online.