Join us to commemorate Remembrance Sunday 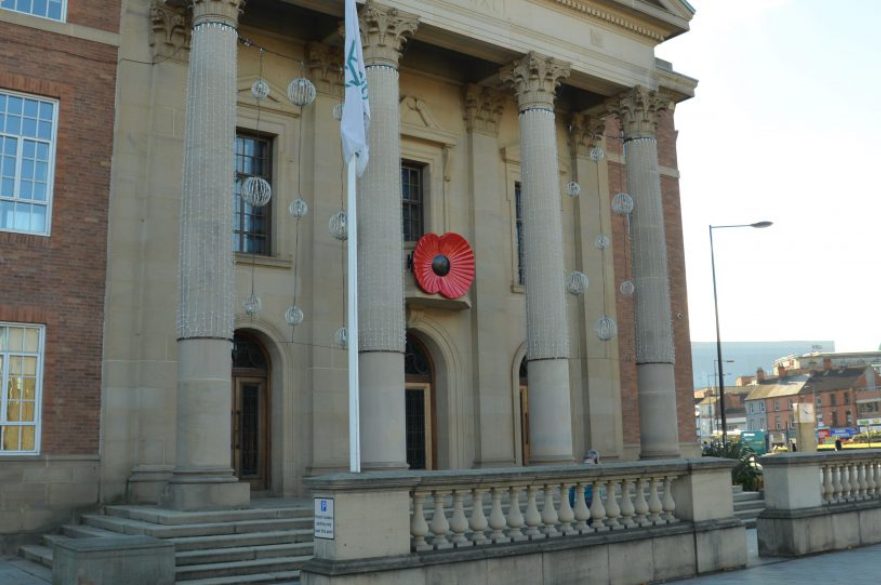 The Remembrance poppy on the Council House

On Sunday 13 November, the city's Annual Remembrance Sunday Service and Parade will take place. Troops from the Royal Electrical and Mechanical Engineers 148 Divisional Support Company, and members of local veteran and youth organisations will parade through the city centre.

A short service, led by The Very Revd Dr Peter Robinson, Dean of Derby, will take place after the first part of the parade, during which a two-minute silence will be observed at 11am. Following this, wreaths will be laid at the War Memorial before the second and final part of the parade.

Everyone is welcome to come and pay their respects to servicemen and women who lost their lives during the two World Wars and subsequent conflicts.

Councillor Robin Wood, Mayor of the City of Derby said:

Remembrance is a key date within the civic calendar, and I am delighted that once again, Derby City Council will be hosting city centre events on both Remembrance Sunday and Armistice Day. I encourage as many residents as possible to come along and pay their respects to our fallen servicemen and women as we come together as one community.

Similar to last year’s commemorations, this event will take place across two sites – on Corporation Street and the Market Place. Members of the public are invited to view the proceedings, which will begin at 10.50am, from designated areas in these two locations where there will also be large screens streaming the event.

Those wishing to see the start of the parade and service in person are advised to go to the viewing areas on Corporation Street. Alternatively, those wishing to view the wreath laying in person should go straight to the Market Place. Once the service has finished and the parade has continued crowd barriers will be moved so that members of the public can move from Corporation Street to the Market Place, subject to adequate space.

The beginning of the two-minute silence will be signalled by a maroon. Maroons are explosive devices, similar to fireworks, which create a loud bang. Paper orders of service will be handed out in the public viewing areas or can be downloaded here - Remembrance Day order of service.

Due to the nature of the event, the following road closures will be in place on Sunday 13 November from 8am – 1pm:

The Assembly Rooms multi-storey car park will be closed from 8am – 2pm on 13 November, and the on-street parking on Full Street will be suspended from 8pm on 12 November. Members of the public driving into the city centre are advised to park at the Chapel Street multi-storey car park.

Blue Badge holders will be able to park in the pay & display bays on Derwent Street. Residents and hotel guests who may be affected have been contacted with details of alternative provisions.

Members of the public who are unable to attend in person will be able to watch the service and wreath laying live on the Derby Live Vimeo.

On Armistice Day (Friday 11 November) there will also be an opportunity for members of the public to pay tribute to those who lost their lives in service. This will take place at 10.50am at the War Memorial. Armistice Day order of service

For further information, or to discuss how you can be involved in this year's commemoration please contact Civic Services via email or telephone on 01332 643066.