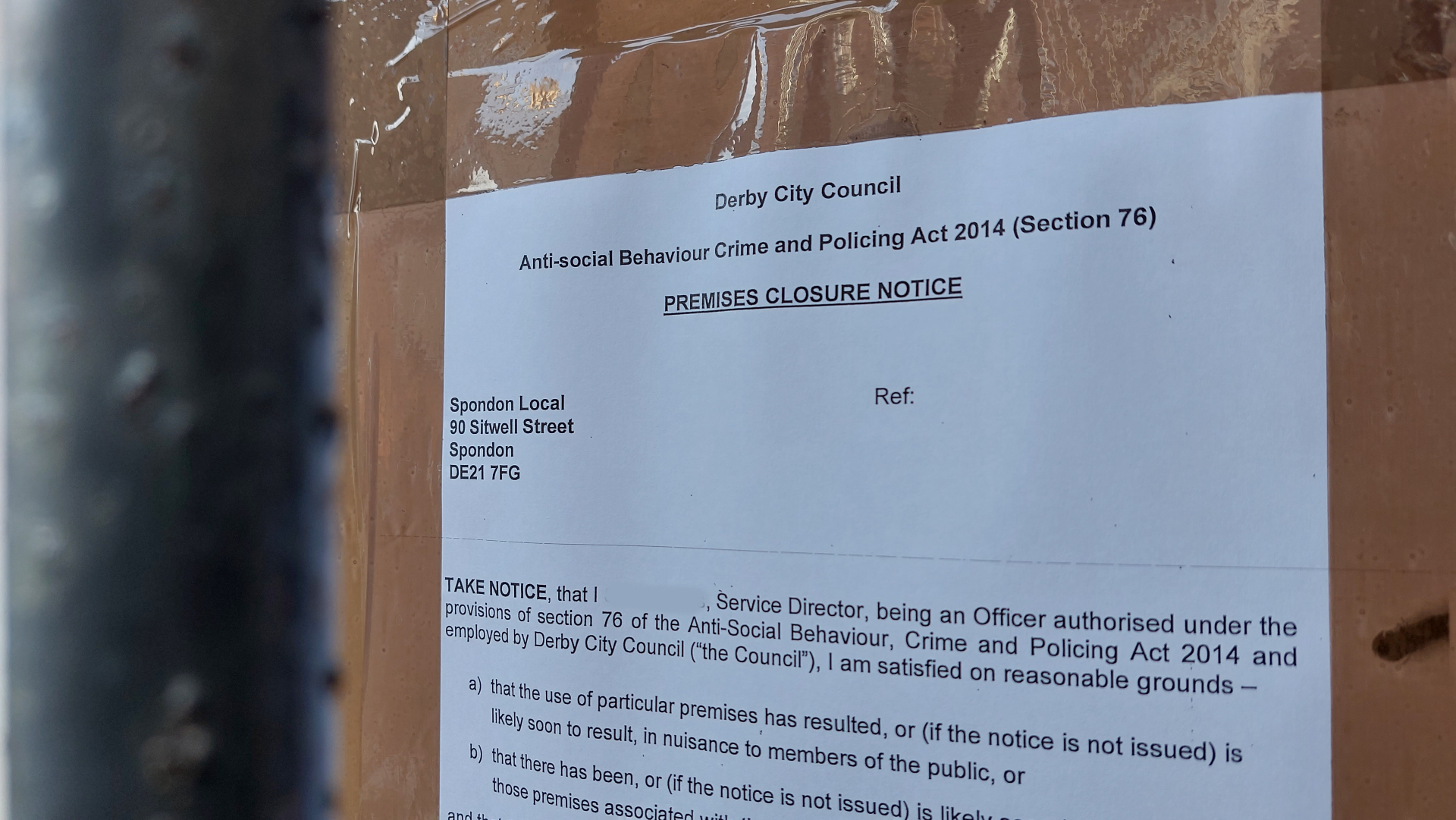 The shop will remain closed for at least three months.

On Wednesday 18 January, Derby City Council’s Trading Standards team successfully closed a Spondon shop after it was found to be in a dangerous condition, selling illicit tobacco products and also selling vapes to local school children.

The shop was closed using powers from Section 76 of the Anti-Social Behaviour Crime and Policing Act 2014. It’s the first time such legislation has been used in the city.

The powers enable Officers to serve a notice at a premises and force it to close for up to 48 hours. At a hearing at Southern Derbyshire Magistrates Court on Thursday 19 January, District Judge, Johnathan Taaffe granted the full three-month closure order of the premises. During this time, no one will be able to enter the shop without permission from the court.

During the period of the closure order, anyone found in the premises could face up to 51 weeks in prison, a fine or both.

Spondon Local (also known as Spondon Mini Market) was visited several times in recent months with Officers from Trading Standards and Derbyshire Police finding illegally imported and counterfeit cigarettes and tobacco behind the till and concealed around the premises. Additionally, the shop was also found to be selling illicit vapes that do not comply with UK laws and multiple complaints were made about vapes being sold to pupils of nearby West Park School.
During one visit, Officers found unsafe wiring in the shop. Bare wires had been pushed into a plug socket which was powering a heater, electric oven and the lighting.

Several people working in the shop were found to be working without permission to work in the UK.

The closure of the shops comes just a few weeks after a shop owner was prosecuted and handed a suspended prison sentence for the sale of illicit tobacco in an Alvaston shop as part of Op CeCe.

“Our Trading Standards team are working harder than ever to stamp out the sale and supply of illicit tobacco products in our city and this Closure Order goes to show that the team will use all powers available to them to protect residents in the city.

"The sale of illicit vapes to school children is particularly abhorrent and we are working closely with partners across the city to educate school children and residents about the dangers of vapes that don’t comply with safety laws.”

“We have been concerned about Spondon Local for a number of months as different members of our community have reported that they have been selling vapes and other products to our pupils. I have attended the shop on a number of occasions to express our concerns and to detail the impact that vaping can have on our children. Unfortunately there was no desire to do the right thing and to change practice.

“After liaising with West Park families, Local Councillors and the local policing team, I am absolutely delighted that Spondon Local has been closed down. This really does emphasise the impact that positive community action can have.”

“The closure of businesses in this way is a thankfully unusual occurrence but anyone who breaches the regulations in the same way should be under no illusion that they will be dealt with in the same way.

“We work closely with partners to act upon information that we receive from members of the public and will continue to do so to ensure that our communities are kept safe.”